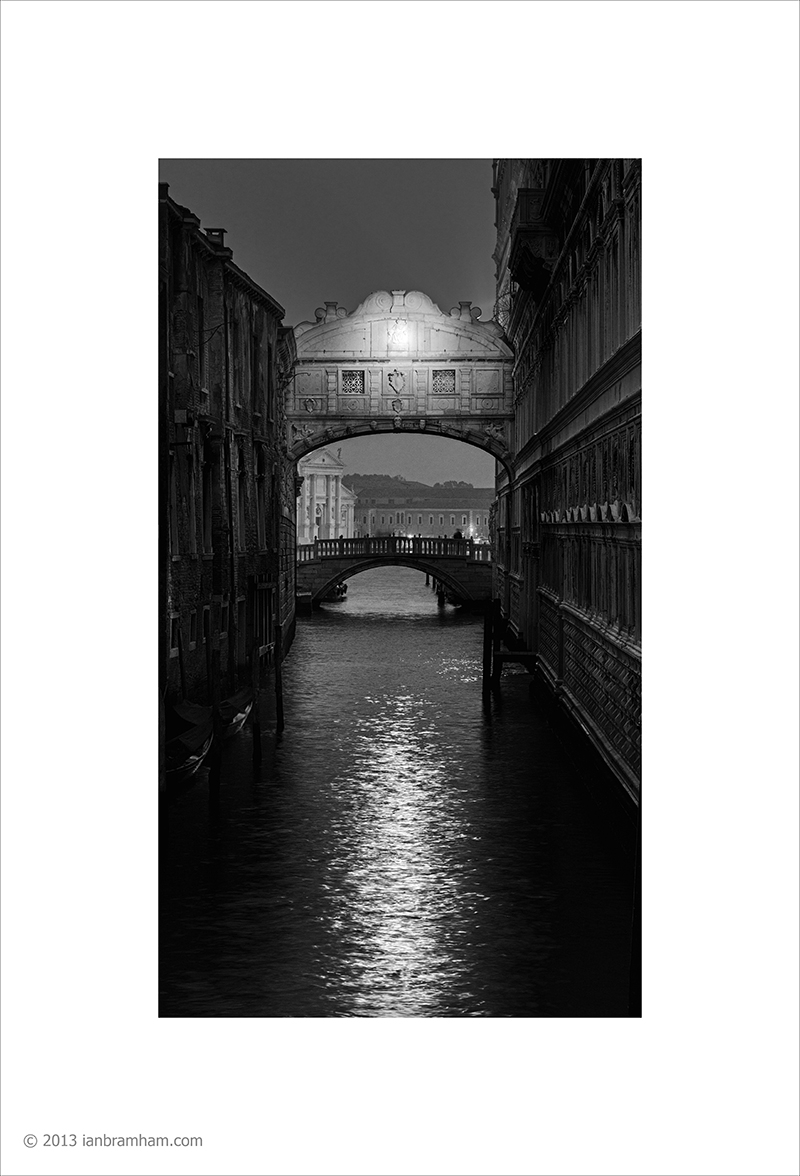 The 'Bridge of Sighs' was designed by Antonio Contino at the beginning of the 17th century and was used a secure way of bringing prisoners over the 'Rio di Palazzo' canal from the prison to the interrogation rooms in the Doge's Palace.

The name of the bridge is supposed to come from the sighs made by condemned prisoners as they crossed the bridge and saw Venice for the last time.

From a technical point of view this photo proved very challenging, mainly because of the bright spotlight that is directed at the face of the bridge. In order to avoid blowing the highlights I set the camera to fully manual and deliberately underexposed the photo by about 5 stops. I then lifted the very dark shadow areas in post processing to get the result you can see here.

The dynamic range that is available from the latest digital cameras (like the Nikon D800 that I use) is simply astonishing but you have to know how to set the exposure to optimise the potential of the digital 'RAW' file. Unlike film, the dynamic range potential of digital cameras lies in the shadows rather than the highlights so in landscape images like this one it's always best to expose the photo using the camera histogram so that you ensure that you don't blow out the highlights - they wouldn't be recoverable in post processing whereas the shadow areas can easily be lifted to give surprising results.

In this image I could have made those shadow areas even brighter if I had wanted to but I deliberately left them a little dark as I felt it contributed to the overall mood of the photo.

The lighting and composition are wonderful.

Thanks for the "lesson" I'll remember your advices. The shining point disturbs me here I find it a bit too flashy.

This result totally debunks the "expose to the right" theory, which I've never been a big fan of.
Great frame Ian.

A challenge indeed! I remember a few years ago (ahem) with a similar problem on a film exposure, trying to do the same thing on a darkroom enlarger exposure - waving a ping-pong ball on a thin stick around the spotlight bit :-) (I miss those days). In a situation like this I would be tempted to blend two different exposured together - a bit more work, but it might have helped. Cracking picture though.

you have done very well indeed! there are no blown highlights and still there are plenty of detail in the shadows! as always, superb composition and balance!

Stunning! Because of your pictures I want to go to Venice now! :-)

Another classic through your brilliant compo and exceptional rendering! So beautiful are the framing and tonal quality! Great work Ian!

Wonderful. Love the light and the reflection in the water.

As always Ian, this is superb. When/ if I next visit Venice I will surely make the effort to get out early before all the tourists transcend. And brush up on my photographic ability.

That is a beautiful shot.
Merry Christmas To You!

taken from the opposite side and not from the more common pov, I'd say that the spotlight gives more to the shot than it takes away