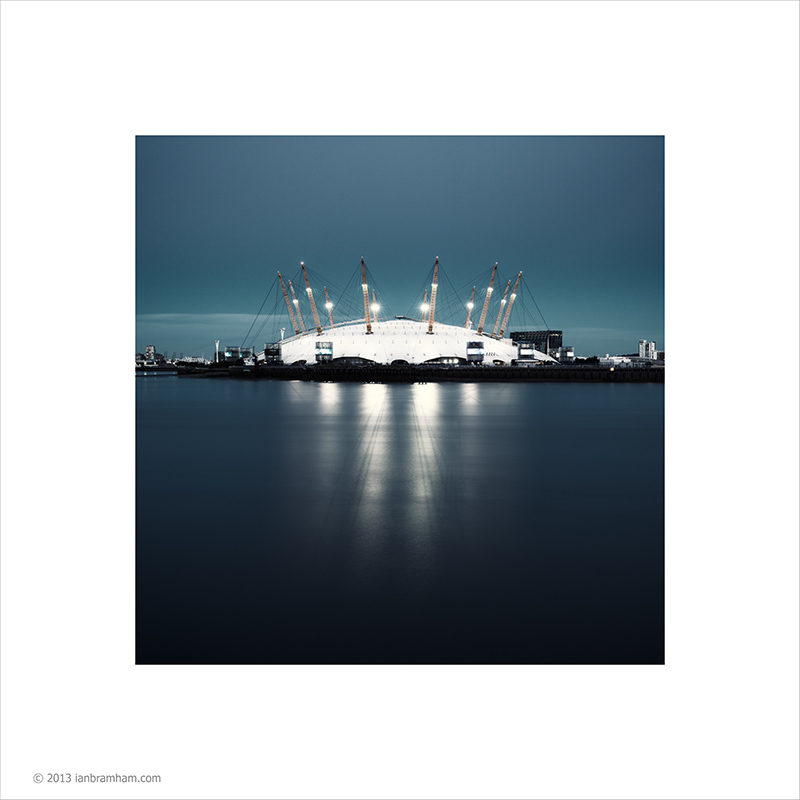 Posted by Ian Bramham (Manchester, United Kingdom) on 10 September 2013 in Architecture and Portfolio.

I thought I'd show you this photo that I took on Saturday evening of the O2 Arena which is located next to the River Thames in east London.

Originally constructed by the UK government for the Year 2000 celebrations, the "Millenium Dome", as it was then called, was eventually redeveloped in 2007 as an entertainement complex and re-branded as the O2 Arena.

The concert hall inside only takes up 40% of the space inside the dome but it seats 20,000 people and it is the busiest concert venue in the world. Also, the domed roof is the biggest of its type in the world.

The architect was Richard Rogers.

This was a long-exposure photo and the 2 minutes that the shutter was open has smoothed the water in the river. The result is that the photo has brought out the shadows on the water of the spot-lit masts and cables of that wonderful roof structure.

Ian, really fabulous! You really must tell me the secret of always finding these awesome locations. I've walked around the O2 but never seen such a great POV and you seem to nail it where ever you go in the world (so envious of your great photography)

@Hans ter Horst: It was my first trip to the area Hans so it was just good luck - if you get the LDR to Canary Wharf then walk due East to the river, that's where I took this photo - the exact spot was on the river bank just at the point where the Blackwall Basin meets the River Thames.

Great view ! Like the top of a birthday cake with candles.

@Veronique: Thanks Veronique! Those roof support masts are great aren't they!

When the art of composition is like a precision machine.
It's really amazing to see these cables shadows on the surface of water.
The range of colours is also very nice.

@Gérard Beullac: Thanks Gérard! I often get nice surprises when taking long exposure photos and this one is a good example with those shadows of the cablles becoming more prominent. The horizontal streak you can see in the water was a boat passing through.

Yep, it's the shadows on the water that make this. Beautifully executed.

@digitalCG: Thanks Peter! Those shadows were an unexpected bonus brought about by the long exposure time of the photo.

Excellent !!!
Have a beautiful day.

I like reflections on the water and beautiful long exposure. Lovely place I visited in 2005

Amazing shot Ian! I love the blue colour - I'm sure O2 themselves would be proud to have a copy of this ;-)

excellent composition and light - especially the way it spreads in reflections over the water! the structure looks kind of like a UFO landing...

Your blues are as beautiful as your gray! :)

Excellent long pose with excellent aspect of the water and reflections once again.