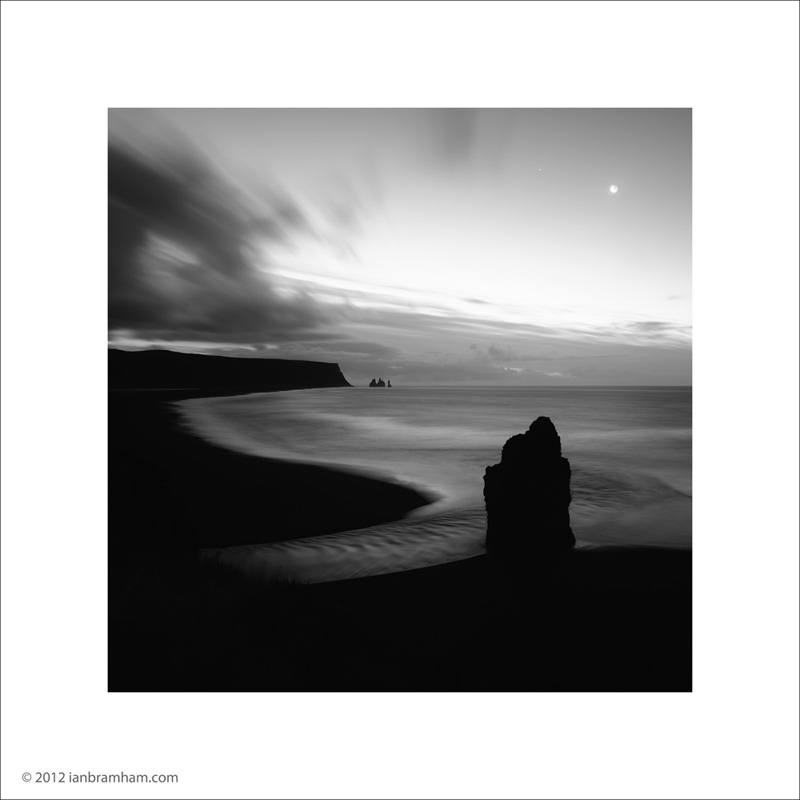 A waning crescent moon photographed at dawn from the clifftops near Vik on the south coast of Iceland in October 2012.

The bright star to the left of the moon is the planet Venus.

I'm going to have a break from Aminus3 over the Christmas holiday period but I'll be back posting new photos in early January 2013.

Thank you for your comments on my photos in 2012.

Merry Christmas and a happy New Year to all of you!

Fabulous, I stood on this same beach a few years ago, you make it look absolutely gorgeous!

Magnificent ! Have a good break and Christmas holidays ! and Happy New Year too !

It is always a pleasure to discover your pictures Ian. Your choice of bulb are always excellent and beautifully presented your pictures.
Happy holiday season to you and I hope Santa will be generous with you!

Great !
Captured on October 30th ? I've done that day in the morning, some pictures of a full moon disappearing behind a hill.

@Gérard Beullac: Hi Gérard!....no, actually this was photographed on the 12th and it was a crescent moon, although the rest of the circle of the moon's shape is still visible so it looks rather like the full moon in your shot!

And ... have a great Christmas time !

Another superbly emotive black and white Ian, I look forward to your return next year. Have a great Christmas!

Love the smooth feel and your always perfect monos, have a wonderful Xmas period and thanks for your visit, always appreciated Ian*

great !perfect B/W peacefull atmosphere as usual in your pictures .Ireally like your work. Have a ggod chrismas Ian . Annisab

Cracking shot, Ian! Have a good one!

Mystery, drama and enchantment! Another masterful work Ian! Have a most enjoyable holiday my friend! See you in 2013!:-)

Wish you a merry christmas!

Congrats on the spotlight !

You're on a roll Ian, nice shot and congratulations.

Congratulations on the spotlight

Congratulations on the Spotlight Ian !

Another stunning shot, Ian! Congratulations on another well deserved spotlight!

Absolutely gorgeous, congratulations on the spotlight!

Beautiful ! Congratulations on the spotlight !

fantastic transition of light and tone through this frame that makes for a magical mood!excellent composition and exposure!

Congratulations on your SPOTLIGHT!

Once again, a wonderful B&W! Congratulations on this well deserved Spotlight!

what can I say? stunning work Ian, its perfection. wishing you and yours a very happy christmas

Congratulations on the spotlight :)

The inclusion of the moon in this image provides a nice counterpoint to the dark shoreline. Another fine image, Ian.

So full of mood and atmosphere.

I love the treatment and processing.

wooooww! Bravo! This is excellent. absolutely lovely to look at, I love the silhouettes, the moon and intense sky. Congrats on the spotlight!

This image has been featured in 2 Remix collections.

My New Favorites by Anna Cherer