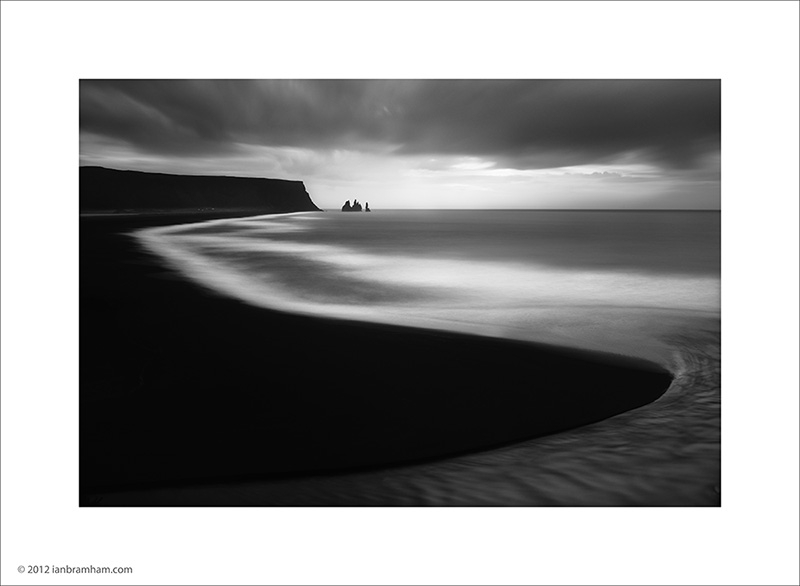 In this long-exposure photo the black basalt cliffs and beach at Vik in Iceland contrast nicely with the white surf of the big atlantic waves.

This was photographed at dawn from a point further along the headland from Vik at a point where the small river that you can see at the bottom of the photo flows into the Atlantic Ocean.

The biggest issue with this photo was trying to hold the tripod down in one place during the 2 minutes that the camera took to take the image - I was photographing this from the top of a steep cliff and the winds must have been at least 30mph.

Really excellent how this turned out, the light is really magical. Great symmetry along the shoreline, no detail in the dark areas, but it works out beautifully in this high contrast picture. Another gem !

Ian, Great shot. When I first viewed this on your flickr site I thought the simplicity was magical. The lines lead you into the shot with a very peaceful feel to it. Every shot I see of Iceland makes me want to visit.

@Andrew Atkinson: Hi Andrew - when I first set up the tripod on the clifftop looking down on that view it was this slightly wider composition with the big rock in the foreground that caught my eye - here: http://www.flickr.com/photos/ianbramham/8112718402/in/photostream/lightbox/ (have a look for the seagull that stayed still on top of the rock for 2 minutes!)
After a while I realised that if I cropped in tighter to exclude that rock I could make the composition simpler and stronger. I'm sure you're the same but the reason I love long-exposure photography is that it gives you time to think carefully about the scene in front of you.

such a nice shot
i like it
have a good day

It's gorgeous! Have a nice day.

Amazing! Did you get up to the lighthouse at Dyrhólaey, close to where you took this shot?

@Hans ter Horst: Hi Hans! - No we didn't get to see the lighthouse unfortunately.

I love the black beach - so unique. Wonderful frame!

Love the contrast between land and sea and that sweeping 'S' curve. Simple yet striking.

5*!!!!! I admire your work a lot! I'm just a beginner at long exposure shots and you're right when you say "that it gives you the time to think carefully about your scene".
What filter did you use?

@Denise: Hi Denise, for this photo I used a Lee 'Bigstopper' which gives 10 stops of light reduction. Without the filter the exposure time was about 1/30th second at f8. The other nd filter that I use a lot is a 6 stop made by "B W". Sometimes I stack the two filters together to get 16 stops.

It's the shape of the composition that sells this one Ian, as you say, plenty of time to think about it.

Another masterful interplay of light, forms and textures... and the result is just magical! Definitely moving the viewer to feel and dream! Bravo Ian!

This is wonderful, i would love to take something this good.

stunning composition with the sweeping curves to lead the eyes through and excellent transition of tones along the way!

Pure delight, such a smooth S-shaped invitation for the eye to dive in...

I am running out of superlatives. . .

Amazing for the 'Ray of Light' collection!

This image has been featured in 3 Remix collections.