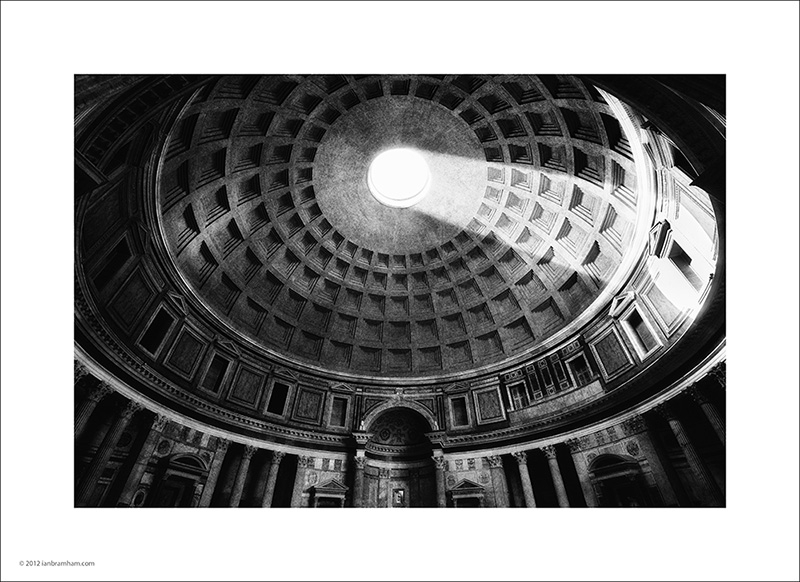 Posted by Ian Bramham (Manchester, United Kingdom) on 6 August 2012 in Architecture and Portfolio.

I've recently returned from a trip to Italy and the Pantheon was certainly the most impressive building that I visited in Rome - amazingly it was built about 2,000 years ago and has been in continuous use since then, initially as a temple to the Roman Gods and then for the last 1,400 years or so as a Catholic church.

With a diameter of 142ft (43.3M) the dome is still the largest unreinforced (ie no steel reinforcement) concrete dome in the world. The dome is coffered to keep the weight to a minimum and a special high strength 'pozzolan' cement, invented by the Romans, was used. The additives in pozzolan cement are still being used today for modern structures.

The oculus at the top of the dome is open to the sky creating the strong shaft of sunlight that you can see in this photo that moves around the interior in a 'sundial' type effect.

This B&W is great

Love it with the beam of light!

Yes I'd certainly like to visit. Graphic image, and that beam of sunlight is so intense!

Amazing architecture and so is your photography Ian! How could the form, details and lighting be more gloriously portrayed! Masterful!

I like the 'grain', seems you are the one who made this drawing with a charcoal pencil !

Really beautiful shot, Ian! Love that you captured the detail in the shadows as well as in the shaft of light.

Great image Ian. The processing is excellent, like Ryan said you have managed to capture the detail in the shadows and highlights.