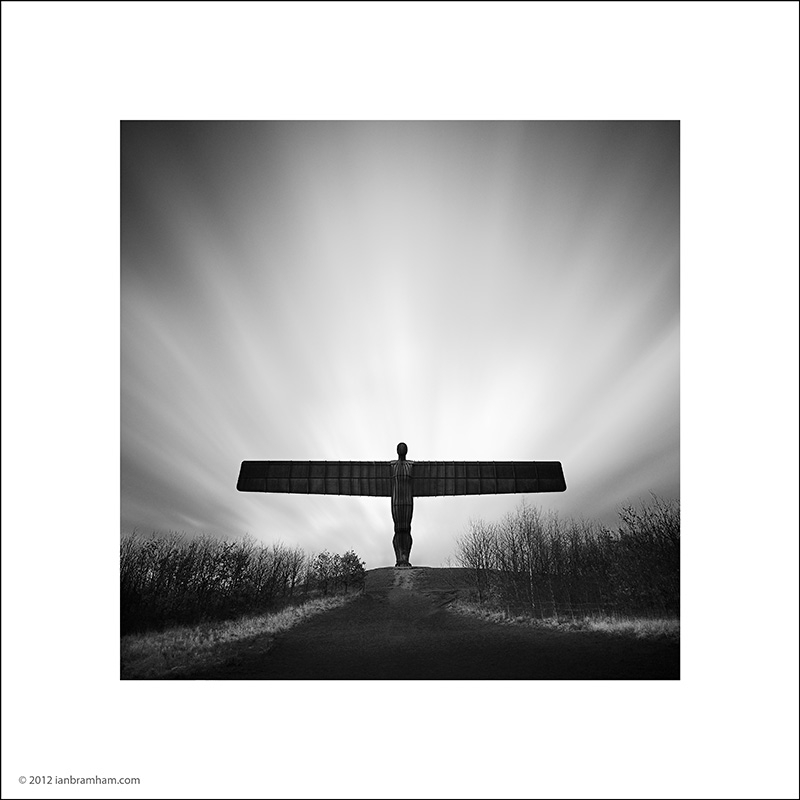 I was in Newcastle in the NE of England on Wednesday taking my daughter to a University interview. The main road in and out of the city passes right next to a famous statue called the "Angel of the North" by sculptor Antony Gormley.

He's the sculptor who created the 'iron men' statues on Crosby Beach that I've photographed so often.

Anyway here's a quick shot that I took as we were leaving the city - well actually it's a slow shot as it was a 4 minute exposure but you know what I mean!

We really didn't have much time there but I guess these are the situations where lots of practice taking long exposure photos pays off.

The scale of the statue doesn't really come across well in this photo but it is enormous - it is 20 metres (66 ft) tall, with wings measuring 54 metres (177 ft) across.

Amazing, I love the way the light seems to radiate from the statue!

@Hans ter Horst: Thanks Hans! - 16mm on full frame really exaggerates perspective which gives that impression that light is radiating from the statue and the 2 stacked nd filters have resulted in the natural edge vignette. All in all this didn't need much processing, the main things apart from the obvious square crop and b&w conversion involved some lifting of the shadow areas and an overall boost to contrast.

Impressive sculpture !
The long pause creates a surnatural light all over it and it works superbly !

Ian, great shot. possibly one of the best I've seen of the Angel. I wish all me quick shots turned out like this :-)

Seriously Ian. I am amazed by how you see this world! It is many years that you have been in my blogwatch and you never cease to amaze me. You have an extraordinarily consistent talent. Day after day, I am in awe. Perhaps you do not appreciate how you impact on others? It isn't about the processing. It is your eye. Thanks for making my life and my visual travel in the UK so amazing.

@Helen: Thanks Helen! I do love photography - hopefully that shows through from time to time!

Looks like a completely different world compared to my old colour one, I'll have to give this a try Ian.
Just think, you drove by the best coast in the north-east, you might have more time on your hands next time eh?

Yes, I've seen this in documentaries and it is humungous! I like your version much better. 4stars. ;OD PS: Hope your daughter gets in.

Beautiful photo! May I ask, how do you achieve an exposure longer than 30 sec (shutter lock?)?

@Brandon: Hi Brandon - I use a DSLR camera. Mine is a Nikon but they all have a setting called 'bulb' for exposures longer than 30 seconds. I use a remote control for long exposures so that I don't have to keep my finger pressed down on the shutter button. Not touching the camera while it's doing its thing on the tripod also helps avoid blurry shots.

@Brandon: No, if you use the bulb setting then you would get a single exposure photo of 60 seconds and definitely not two shots of 30 seconds each (the longest single exposure I've successfully done using bulb is about 10 minutes but the correct exposure calculation starts to get complicated beyond about 8 minutes or so). Yes, I do enable 'long exposure noise reduction' in the camera menu settings - it's a big help.