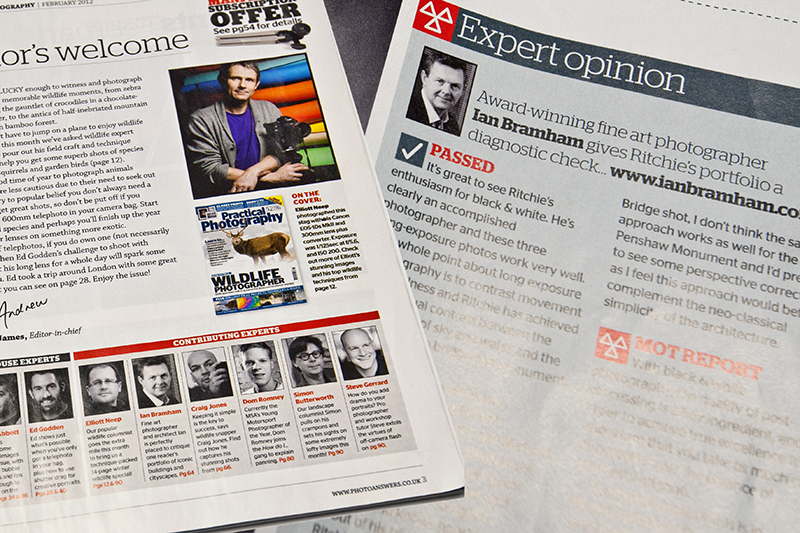 Posted by Ian Bramham (Manchester, United Kingdom) on 5 January 2012 in Miscellaneous and Portfolio.

A few months ago I was lucky enough to be asked by Practical Photography magazine here in the UK to be a contributing writer for the February 2012 edition of the magazine - it's on sale now.

Practical Photography have a regular monthly feature called the "Portfolio MOT" which is a two page critique of a readers images - in this case it was 3 b&w images by a very talented photographer from the north east called Ritchie Coatsworth with some background text from him on how he went about taking the photos and where he finds his photographic inspiration. I then had space for about 500 words of my own text with an accompanying modified photo which formed the actual critique on Ritchie's photos - it was a real privilege.

Congratulations Ian! Happy and Beautiful 2012 to you!

@Gérard Beullac: Hi Gérard!...yes, it would be great if the rest f the year continued in this vein!

A fine shot, and congratulations on this endeavor. It actually sounds like you have your finger in many pies.
I enjoy your talent and the way you share it.

@DULCIE: Thanks for that DULCIE!

Congratulations for everything you have achieved so far, it has been great following the evolution of your work and vision since the beginning!

@Alfredo J. Martiz J.: Thanks Alfredo!....yes, it's been about 4.5 years since I first started posting photos here on AM3 & about the same for you isn't it?

Congratulations! Your 'diagnostic check' I'm sure is well received and appreciated!
Happy New Year, all the best in 2012!

@Photographs by M.E.: Thanks very much for that!

Bravo, Ian, they can be proud they have you now as a real expert & talented one to share his clever opinions, congrats*

@k@: Thanks very much Karine!

Congrats Ian!!! Feel so happy and excited for you! The readers are real lucky to be able to benefit from your critique!:-)

@hugo poon: Thanks Hugo...it was an exciting opportunity!

@Pavan Kaul: Thanks very much Pavan!

Congratulations Ian. You have a great talent.

@Marie LC: Thanks for that Marie!

Ritchie is a lucky guy to have someone of your talent offering an opinion! Congratulations on your continued success also - you must be chuffed :-)

@Ian Smith: Hi Ian!...well, it was an amazing opportunity and a real privilege!

Congrats, Ian; I'm sure you revel in wearing your gold crown, only in private, of course! Well done! :OD