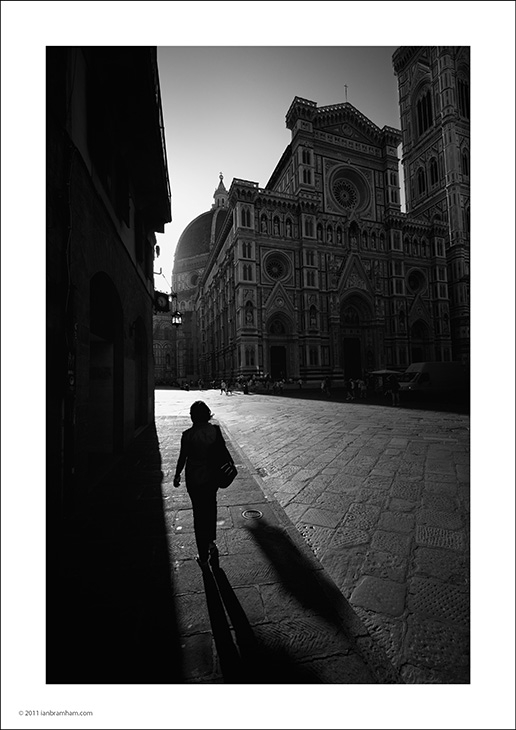 Low, early morning sun forming a natural chiaroscuro street scene in Florence with, prominent in the background, the city's cathedral: the Basilica di Santa Maria del Fiore, or the Duomo as it is ordinarily called.

Wikipedia on 'Chiaroscuro': "When discussing Italian art, the term is sometimes used to mean painted images in monochrome or two colours.....the term early broadened in meaning to cover all strong contrasts in illumination between light and dark areas in art, which is now the primary meaning."

Perfect composition, beautifully lit in this, what must have been, a tricky backlit shot

@Hans ter Horst: Thanks Hans....Florence is a city where the light always seems to be beautiful, no matter what the time of day!

Fantastic bw ! I like very much the way the light is distilled and of course your always excellent composition

The early morning photo sessions in the almost deserted streets are often providing exclusive opportunities for making gret pictures.
This is a brillinat exemple.
The heavy contrast on this perfectly clean image is a wonder.

@Gérard Beullac: Thanks Gérard!...re the light and exposure method - I photographed in RAW using the histogram 'expose to the right' method and then in post processing I lightened the heavy shadows in the facade of the Duomo to give what you can see here. I could have lightened the shadow areas even futher but I didn't want to lose the feeling of that intense light.

It's the degree of darkness of the shadows that make the light areas seem as bright as they are and knowing how far to go in post processing is always the trickiest part.

Superb deep contrast Ian, I love that mysterious second shadow next to the woman.

wonderful work with light and shadows as the vintage buildings loom in the background...

masterful ~ I love the "feel" of this photo

love the angles and shadows in this picture

I seee what you mean, gorgeous shadows cast here.. thank you so much.