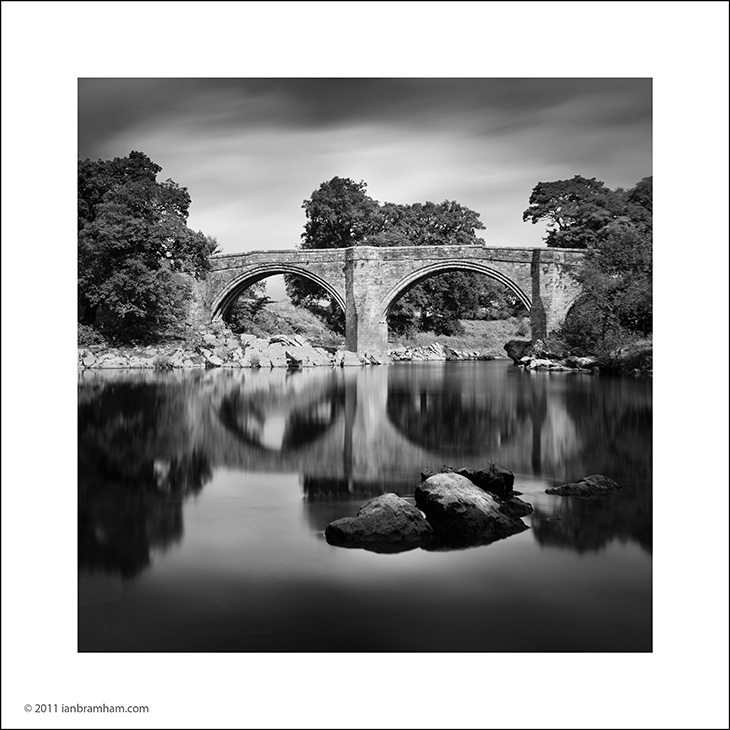 A wonderful medieval stone bridge that I photographed last weekend during a joint photoshoot with John Leech and Alexring:
John Leech
Alexring

History of the bridge according to Wiki:

Built around the year 1370, the legend has it that the Devil appeared to an old woman, promising to build a bridge in exchange for the first soul to cross over it.
When the bridge was finished the woman threw bread over the bridge and her dog chased after it, thereby outwitting the Devil.
Several large stones in the surrounding area, including the Great Stone of Fourstones, are ascribed to the Devil's purse-strings bursting open as he ferried masonry to build it.

I love these long exposures and started experimenting with them myself after watching the 'Hokkaido' video on Michael Kenna's website. Your take on long exposures is different from his, but equally good these days. Since I have been following you here on AMinus3, I think you have made an incredible progress.

Yes, that Hokkaido video of Michael Kenna in action is bewitching isn't it! Thank you for the comment about my photos. I'm pleased you think I'm still improving as sometimes I have my doubts. Making any kind of 'progress' with my photography is certainly getting harder and harder.

This photo is a good case in point as I feel I should somehow have done better with the photos I took of this bridge as the weather and light was ideal with a very interesting sky. Long exposures like this one aren't always the answer and I nearly posted this 1/2 second exposure instead which John Leech prefers:

Fascinating sky isn't it on the alternative version with the shorter exposure....if only it had been symmetrical it would have looked like a pair of horns - very appropriate for a 'Devil's Bridge'.

This is also very nice.

@Ana Lúcia: Thanks Ana!...the stillness is a result of the 2 minute exposure time.

Interesting history...does that mean that, in the olden days, construction was viewed as the Devil's work? Great shot! ^)^

Tough choice Ian, but I think you got it right. Plenty of drama in the shorter exposure, but overall the smoothing of the longer exposure creates a far more serene mood.

Absolutely gorgeous, Ian....you know, though I like the other image, I prefer this one:) Beautiful work, as always!

Strong tones, good use of that reflection.

of the three versions...this is the one. It's the glossy depth of tone that does it.
good work Ian.

Simply stunning ! The reflections in this beautiful monochrome are beautiful

This picture makes my imagination go back to the Middle Ages!

Great image! Like the mood created by the longer exposure.

I love the way the bridge frames the trees, but most of all, the attention goes to the serene reflection of the scene in that peaceful water. It looks like a photo of an earlier time :-)

Your photography remind me classic master of photographer's works

This is too much artistic... Good job Ian.