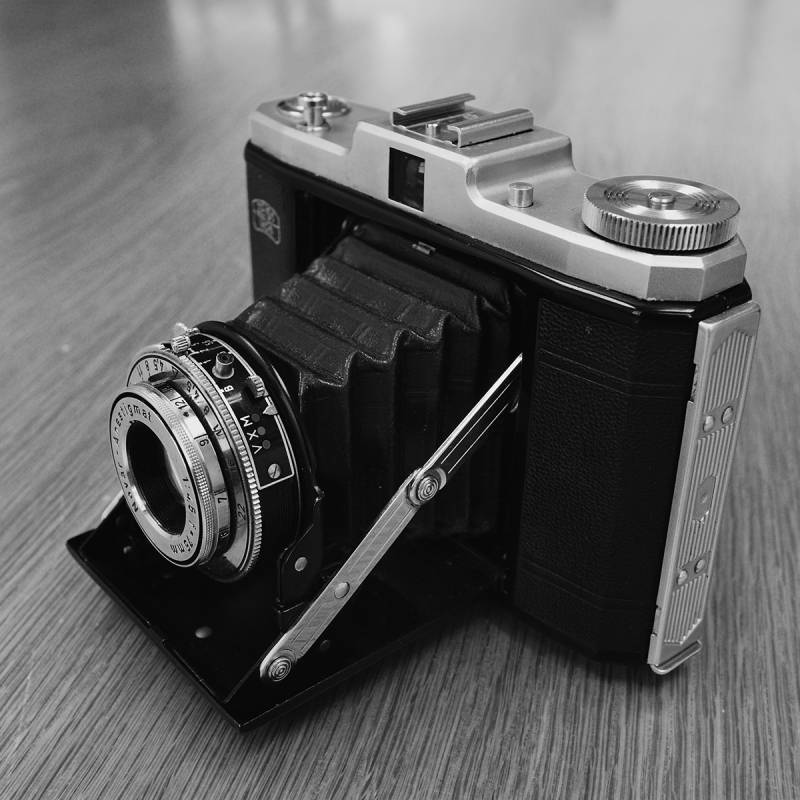 Posted by Ian Bramham (Manchester, United Kingdom) on 16 May 2011 in Art & Design and Portfolio.

Using old film cameras can be a lot of fun!

I was lucky enough to be given this one recently by a very kind relative who wasn't using it any more!

It's a 1950s fold-away medium format Zeiss Ikon Nettar. It's the 518/16 which is one of the later models with double exposure prevention and red warning in the viewfinder. I think this particular model is the Signal Nettar Ipms made some time between April 1953 and Jan 1959. It has the f4.5 75mm Novar-Anastigmat lens and a Gauthier Prontor SVS shutter.

For those of you who haven't tried it yet, medium fornat film is quite a bit bigger than the more common 35mm but is still readily available at most high street camera shops. Because the negative is bigger it produces better results. This particular model of camera takes square images 6cm x 6cm.

With the lens folded away into the body the camera is surprsingly small and will fit in the pocket of my jeans. Its also very light in weight.

The viewfinder is tiny and very primitive and you have to guess distance for focusing and set it manually on the lens or use hyperfocal markings on the lens. To get around this I bought a small secondhand rangefinder for a few pounds which fits on the accessory shoe on top of the camera....I use the rangefinder to measure distance and set the lens accordingly.

A separate light meter is needed for accurate exposure but I can use my iphone app or my digital camera.

I've now taken a few rolls of film with it and I'll show you some of the results over the next few days.

Amazing, looking forward to seeing the results; I also shoot medium format on my Pentax 645NII, but that camera has all the AF and built-in light meter capabilities that we are used to in modern SLR and DSLRs. Did you develop the negatives yourself? That's where the magic of analogue photography really starts.

@Hans ter Horst: Thanks Hans....no, I didn't develop the negatives myself. I don't have the necessary equipment although I've done it for pinhole photos that I took on photo paper rather than film. I hope you like the results. I'll post the first photo tomorrow.

Hi Ian, I've been thinking of giving film a try out its been a while. Can't wait to see your results. You may have seen this but just in case you haven't there is an article on Michael Kenna in the latest Black & White Photography magazine.

@Andrew: Thanks for letting me know about the Michael Kenna article Andrew. I'll get a copy of the mag.

How exciting! Next you'll be converting your shed into a darkroom for DIY processing and exposing - its far more rewarding than Photoshop (though much more time and wallet consuming). Have fun, and can't wait to see the results.

@Ian Smith: It is exciting to try new things isn't it! I was pleasantly surprised at how well the images came out from this camera.

Great great shot Ian. A must !

That's a great camera, and I dream about having Zeiss lenses. I too have been playing with medium format film of late but on a much lower tech level, I have been shooting with a Holga.

@Ralph Jones: Hi Ralph, I've wanted to have a try with a Holga for a while now but I doubt I'll go as far as buying one for myself. In my foolishness I thought the photos from this Zeiss Ikon might be 'Holgaish' as it's such a simple and small camera but, in actual fact, the image quality when I got things right was every bit as good as my D700 (maybe better in some instances?). I'll post a photo from it tomorrow which shows it at its best.

I know it's not really the same but my iphone camera has some great apps if I want to play around with the Holga look. Here's an example of an iphone photo using the instagram app. All processed and uploaded to the web from the phone (no computer) http://www.flickr.com/photos/ianbramham/5577754622/sizes/o/in/photostream/

@Photographs by M.E.: Thanks!

Very curiously to look at these photographs. You are true enthusiast!

Sounds great... looking forward to seeing the results from this camera.

nice piece of vintage machinery! there is always something special about old designs and equipment - i think it helps us to understand better how we arrived at what we have today...

Ian, I am counting minutes and can't wait to see your first image taken with this amazing camera!!!!

Interesting bit of description there.. looks like a wonderful vintage camera! Would be interesting to see the results of the photos taken from this one!