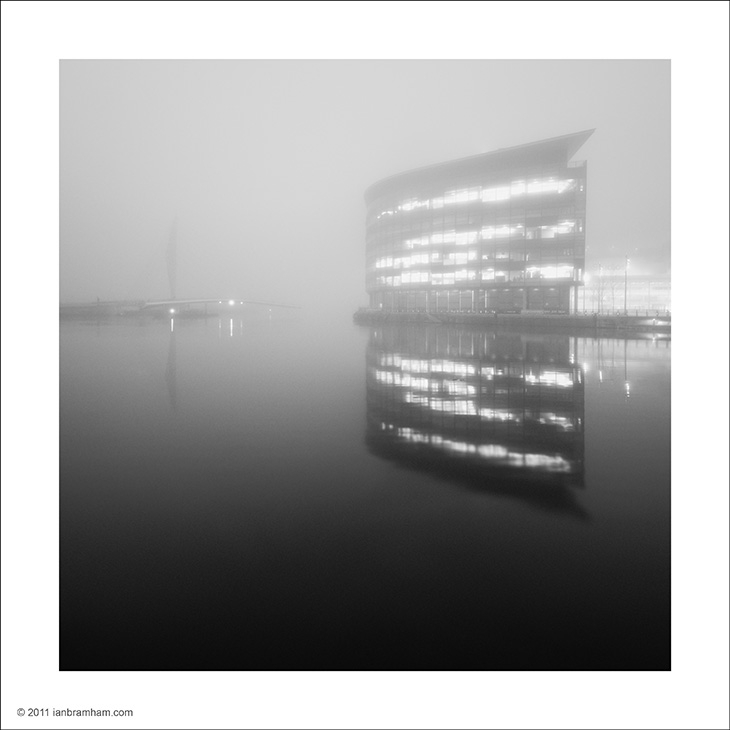 Photographed in some pre-dawn winter mist, this is part of the BBC Media City complex in Salford Quays.

On the left of the frame you can just make out the new swing bridge that will soon link the Media City with the Imperial War Museum located on the opposite side of the Manchester Ship Canal.

The vibration reduction mechanism of the Nikon 16-35vr lens that I used for this photo is surprisingly useful at times - here for example it allowed me to keep this shot at the D700's cleanest base iso of 200 as I was able to get away with handholding the camera at 1/3rd of a second - I did have my tripod with me but I wanted to work quickly before the mist faded.

You'll also notice of course from the exif data at the side of the photo that the aperture of the lens was open at it's widest setting of f4.

@Siguidine: I'm pleased you like it Siguidine....I've been lucky with the mist and fog in Manchester this year :-)

Looks like The Cuts are taking their toll here . . .

@Ronnie 2¢: Hi Ronnie!.....well there doesn't seem to be much enthusiasm amongst BBC executives for moving out of London from what I've read.

This one, because of the lights of the city, exceeds in beauty all the others

@Marie LC: Thanks Marie....I came away with a lot of photos from this 1 hour of early morning fog!

Excellent caputure! You're handheld skills are impressive - just like Hugo :-)

Great reflection and use of the fog!

very impressive Ian...just like the swing bridge in action!

Such a great mood captured and framed!

What beautiful lights and reflections in this winter mist! Fabulously seen and composed... love that minimalist feel! Handheld at 1/3 second?! Oh my!:-) Have a great day Ian!

I know what you mean about image stabilization coming in handy. If you have good technique to begin with it really expands what you can do. My camera has stabilization on the sensor itself, which blows my mind. But it definitely works.

Another beautiful shot. The mist, the reflection, interesting architecture. Great scene and you put it together nicely, too.

That´s fog! I like how it looks so unreal. The bw definitely helps!

Great image. I like the light to dark graduated tones.

Oh, hand held, I can hardly believe it. You achieved a beautiful image with a lovely reflection and a still mood, yet full of energy from the light of the building.