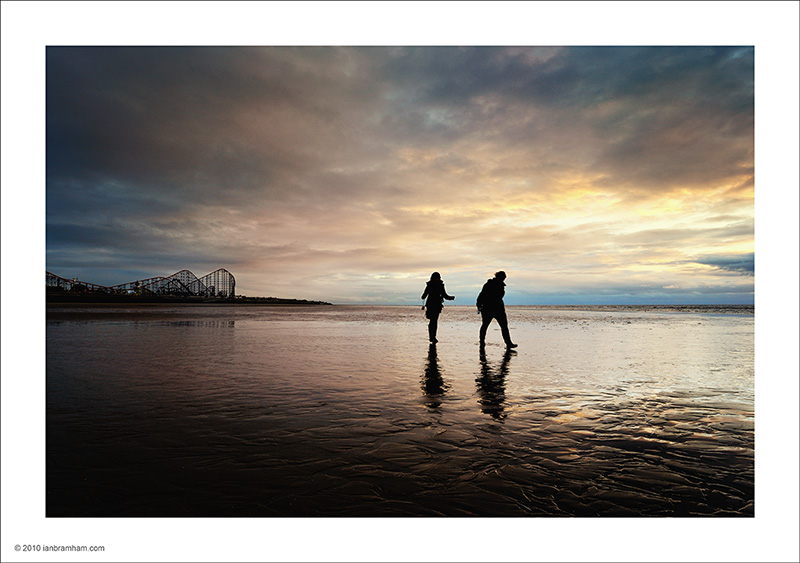 Dusk on Blackpool Beach. There was some wonderful light on the coast last Saturday. It was a real joy to be there with a camera and no time constraints.

How the Lord is the foreground so shiny! Beautiful composition, no obstruction, simple! GREAT!

I agree wtih Maria - with such a light, its amazing to have a foreground so shiny taht adds to the landscape's beauty in the capture. The lights, the clouds - as always in your captures - wonderful.

The subtlety in the color is what really appeals to me in this fine photo.

The two figures mark a big difference, in my opinion, between this shot and the great majority of your pictures. We don’t see here a vast landscape with some figures lost in it, or passing through it, but a human drama happening in a vast landscape. It seems like the woman is talking to the man, who doesn’t want to listen to her, and so he’s walking quickly with his long legs, eyes on the ground. She makes shorter steps, she probably needs to run at intervals to keep her pace, and at the same time she’s calling him, or shouting at him, or simply talking and talking, trying to make herself heard. Maybe they were at the rollercoaster, and had some fun, then something dramatic happened, or was said by one of them, and a pleasant afternoon turned in an unpleasant quarrel. Of course, everyone can read a different story in those two silhouettes, thus confirming how meaningful they are in the sombre landscape which is hosting them. One of your best pictures ever!

this is stunning! dusk light as a backdrop to the silhouettes.... is simply amazing

I love this photo, Ian - I had the same take as Karetnikov above on a possible story between the two people in the photo - it adds a certain "tension" to the photo that I really like. As well the lighting is so perfect - this is a wonderful moment you have captured.

Beautiful shot and lovely detail in the dark and light areas. Great image!!

I simply love this Ian! The night light brings out the detail and silhouettes so beautifully. The roller coaster in the background really makes this something all the more special.

What a delightful palette, and such a subtle one...

Another shot that is absolutely stunning! And the light is so subtle.....

the light, the colour, the composition...stunning Ian!

that`s a really stunning scene seen and captured.love the lights and reflections so much,that`s charming!
REGARDS!

wonderful photo with the silhouettes persons being a great focal point! i like the transition of light and subtle colour in this scene as well - the mood is wonderful!