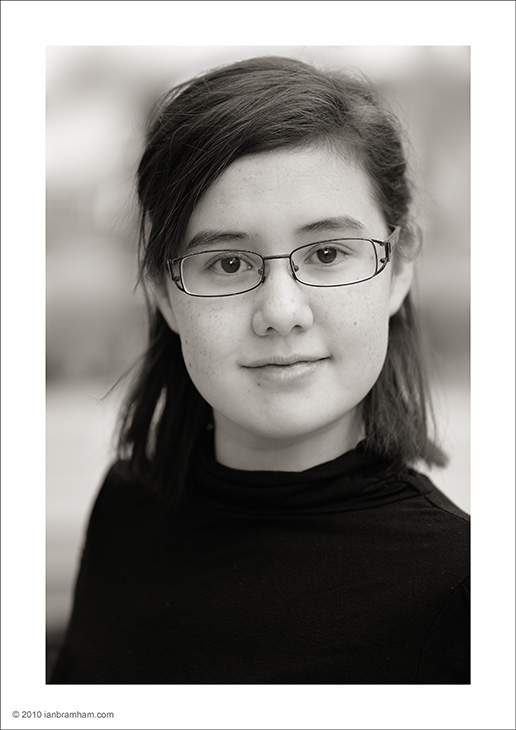 I've been practising my portrait photography a lot recently but I've been finding it a lot harder than landscapes. Here's a photo of my daughter that I took last weekend.

I used a Nikon 105mm f2.8vr micro lens and my camera's pop-up flash at a very low setting.....in fact I had set the flash wrongly but that's not at all unusual for me as I've found learning about how flash works difficult too!

Even though the background was quite some distance away and I was at f3 it was still quite distracting so I used a bit of Photoshop gaussian blur on it at a 100 pixel radius which helped a lot and only took a few seconds.

nice to meet you Anna ;)

Beautiful! Anna looks as though she is full of questions. I'm glad you have trouble with flash too :)

Wonderful portrait, Ian - and it is really nice to meet Anna. I am a fan of her photo blog as well.

Very nice! I love the DOF and her expression! Well done :)

Hi Anna, nice to meet you. I like the expression on your face. Great portrait.

I, too, find portraits to be much harder to do that landscapes... check out my daughter's portrait on my site, although, strictly speaking, it is not a portrait as much as a snapshot! :)

Portrait photography is something I learned a lot about in college (xx years ago), and I'm still not that great at it :-) (I should scan in all the old negs someday) The one thing I can say is that lighting and an interesting subject is key to success. Photographing a person is one thing, but 'portraiture' is something that usually shows 'who' a person is. Its difficult to think 'how' to show this in most situations, but I'm sure you'll crack it.
This is a nice photo of Anna - she looks very comfortable being photographed (obviously by her dad), and you're decision to add extra blur is often necessary if the bokeh is misbehaving.

Beautiful portrait...it seems so revealing of her character, but then you would know better than I.