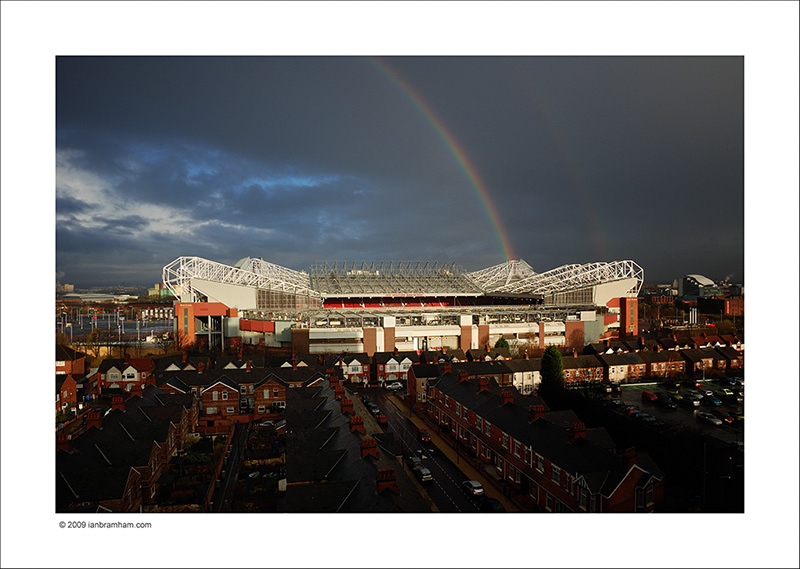 This is not the usual kind of photo that I post here but I know there's a lot of you out there who support Man. Utd.

It's a photo that I took from my office window a few weeks ago showing the end of a rainbow landing over Manchester United FC's stadium at Old Trafford.

The stadium seats over 75,000 people and is the third largest in the UK.

All lights on the stadium and on top of that a rainbow or two. Must be a sign ;-)

@Frida: Thanks Frida....we'll see if it was a sign or not at the end of the season! (a double rainbow must mean two trophies surely? :-)

The pot of gold was my first mental connection too. I like the light in this shot. The glowing stadium and its dark surroundings...

@Mirko Herzner: Thanks Mirko...there have been rainbows landing on the stadium a couple of times recently but this is the first time I had a camera to hand to photograph it!

A perfect image, impressive. An image that makes me think a lot! Greetings

nice shot , the contrast between the little house in the darkness and the stadium in full light , the dark sky and the bright rainbow , well done !

Well, even supporting the Barcelona, this is a great photo, Ian.
The storm light spotting the satadium and this incredible rainbow say that today the Manchester will win :))

Excellent composition, and wonderful light and shadow, and a rainbow as well!

So you have a great job and your office view is of the Theatre of Dreams!!
Tell me, do you have this weeks lottery numbers as well?

@Ted: Hi Ted!.....I shot this with a 16-85 lens at it's widest setting. In reality, this view of the stadium fills one whole side of the windows on my side of the office so I get to look at it in all types of weather and light (and smell the burgers cooking on match days :-)

The only pity is that even 8 floors up we can't see down onto the pitch so we can watch the match for free like we can with the view of the cricket ground on the other side!

Quite an incredible capture Ian, a rainbow over Salford United!

burgers and cricket too...I thought it couldn't get any better! perhaps plenty of free parking on match days?

congratulations by the way on the album cover.

This is a great shot! The sunlight hitting the stadium as well as the rainbow. I wish I had access to your office when I was there last month.

great vision - i like how the stadium is illuminated so well amongst the shadows and dark clouds! the rainbow is a nice touch!

BRAVO is great with the darker backround of the rainbow a picture by the book.