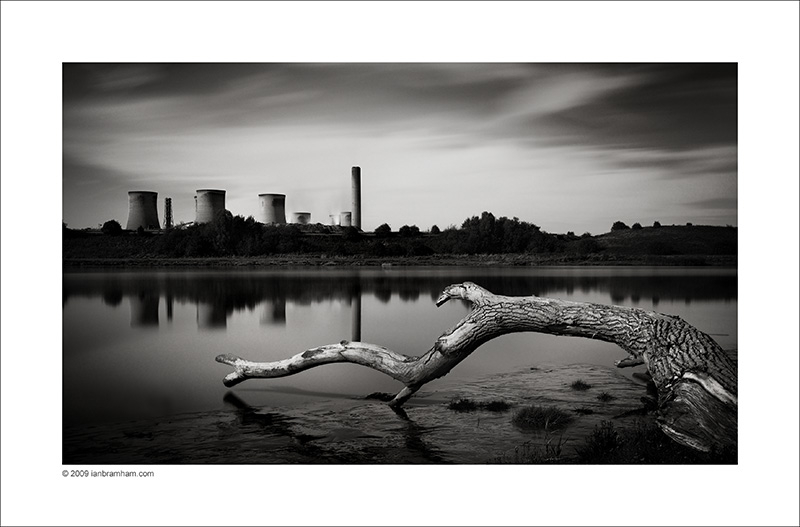 At the Waters Edge

This is the River Mersey in NW England with Fiddlers Ferry Power Station in the background.

It's only in the last 20 years or so that the River Mersey has been cleaned up enough to allow it to be restocked with fish. Before that it was pretty much a dead river just like the the River Styx of mythology.

About 30 years ago when we were kids my friends and I used to swim in the sea a few miles down the coast from here at Crosby - it's amazing none of us died from the pollution!

Fiddlers Ferry generates 1989MW of power burning 16,000 tonnes of coal and biofuel every day. It uses nearly 200 million liters of water daily from the river for cooling.

For those who are interested in the technicalities of long exposure photography this was a 3 minute exposure at f8 and iso200 using a Nikon D40 and Nikon 16-85vr lens.

Also, the dead tree with the powerstation in the background is a classic shot to highlight environmental issues.

beautiful shot, so perfectly composed with the chimneys and the deadwood

This is great! I like your b/W photography. Especially in this picture is the compo. Terrific forground!

Magical shot Ian. Yes the foreground interest really elevates the scene (how far did you have to drag that tree!!!) but what really makes this one for me is the rich depth of tone and almost glossy blacks...how did you manage it?

@Ted: Hi Ted....yes, I was lucky with the tree wasn't I :-) To get good quality blacks in long exposure photos like this there's a few different things that help: #1 - Expose right to maximise signal to noise ratio: http://www.luminous-landscape.com/tutorials/expose-right.shtml This really helps to avoid noise in the shadow areas. #2 - Shoot in RAW format in the highest bit quality that your camera offers. Mine is only 12 bit but your D300 offers 14 bit which is much bettter. I then process using Nikon's NX2 for basic exposure adjustments etc then 'save as' a 16 bit Tiff for conversion to B&W in one of the later Photoshop versions (I use CS3). The RAW/16 bit Tiff combination helps to maximise quality and helps to avoid the appearance of banding or posterization. #3 - as a final step I add a pinch of sepia tone which helps to soften the B&W a little :-) Edit #4 - it should go without saying but shoot in the lowest native iso of your camera - my D40 operates optimally at iso200 but most cameras are best at iso100.

Turned out perfect again Ian the tree is positioned perfectly and the tones are exceptional.

Excellent tones and the position of the tree log is spot on. With the industrial buildings in the background it makes a wonderful contrast.

Thanks for the explanation of what you did to get this result..:).

beautiful composition ! excellent exposure ( thanks for explanation Ian ! ) a great sharpness of the foreground against the smooth background. nature against/industry !

I am always in awe of your skies and painted clouds. A beautiful stillness which creates a kind of quiet eeriness. Superb!

@bluechameleon: Thanks Sharon!....I do love photographing with these nd filters!....sometimes the results seem to work out and sometimes they don't. Part of the interest for me lies in never really knowing exactly what I'm going to get.

Ian, this is a masterclass in composition, lighting and technique!
The subject is as powerful as the processing applied to it. Your tutorial to Ted is also very useful, and I really appreciate your detailed explaination on how you accomplish things (rather than keeping it to yourself )
I hope you didn't pick up any splinters dragging that tree around? *_^

@Ian Smith: Thanks Ian....I had so much help myself from you and John leech when I was starting out that it would be very strange if I didn't also want to follow your example and help others as much as I'm able. That tree branch must have weighed several hundred pounds and there was no way I'd have liked to try moving it. The mud would have been everywhere!

just perfect
I love the composition, the reflection, the BW treatment and the message,...

Wow! The ends definitely justifies the means, but what a workstream. This sounds like the discovery of the Model T Ford for the first time! Thanks Ian.
I am now off to a quiet room with a strong jug of coffee to try and understand the L-L article...

@Ted: Ted - It sounds like it's complicated but believe me when I say I get rapidly bored with post processing my photos and if a photo hasn't got to the way I want it within about 5 minutes then I usually forget about it and move onto processing another one instead. It's very rare that I spend longer than about 10 minutes processing any of my photos. As you've got a Nikon I'd strongly recommend 'Capture NX2' - it's great for handling Nikon's Raw file format and the 'U' control technology is much easier to use and more intuitive than anything in Photoshop. For my family photos in colour it's all that I use these days.

Absolutely a masterpiece!!! The composition, the b&w tone and that Bramham signature long exposure effect work together perfectly! What is more, in addition to being amazed by your impeccable skill and fine craft, I'm so touched by an exceptional strong element of art and spirituality! Congrats my dear!

@hugo poon: Thanks Hugo....that's very kind of you!

Wonderful shot, again! I'm going to buy a ND filter just to try something like this myself! :)

Wonderful shot, once again! You are going to make me splurge on a ND filter just so that I may get shots like this one :)
What was the general light conditions when you took this pic, if you don't mind me asking?

@Bishop: Thanks....it was bright autumn sunshine believe it or not! (UK autumn sunshine that is!). I used a total of 2 extreme neutral density filters screwed onto the front of the lens for this shot - a 10 stop and a 6 stop (giving 16 total) The nd filters and long exposure give an ambiguous quality to the light which I really love as I feel that it leaves more to the imagination.

@Fred: Thanks Fred....it's a lovely simple camera to use isn't it but with great image quality.

great shot, thanks for sharing!

Fantastic, the texture of the tree in the foreground is exellent!

superb yet again! even better than the previous one! a greater hook in the foreground in the form of the branch and there is an amazing clarity to this photo that i really like!

CRacking image, love the tree in the forground, and the exsposure is fantastic

A powerful image, if I've seen one... Your site is testimony to the fact that the D40 is more than enough camera in the right hands!