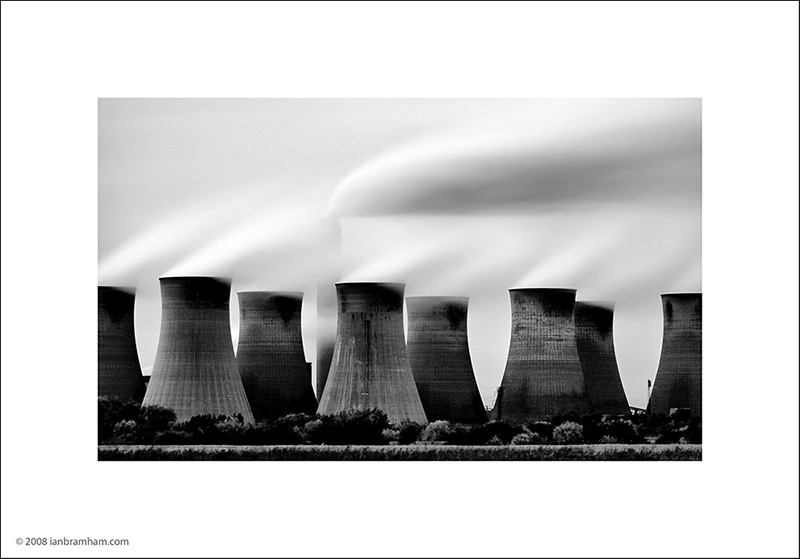 Posted by Ian Bramham (Manchester, United Kingdom) on 29 May 2009 in Business & Industry and Portfolio.

I've learnt so much about composition from studying Michael's photos and then trying it for myself.

Cottam is a 2000 MW coal fired power station in Nottinghamshire. The 8 distinctively shaped hyperbolic concrete cooling towers are the main subject of the photo but in the background you can also see the taller smoke plume coming from the main boiler chimney

Hope they paid you well. This has the markings of Michael Kenna and I'd be a fan too. Well done...nice image.

@Alan Rossiter: Thanks Alan....it was a fair fee I think for them and for me. I don't make much money from photography (although things have been picking up over the last few months) so it's a big thrill to see one of my photos in print and great to see them being used rather than just sitting on my computer.

no one else can make power stations look so beautiful :)

@yz: Well I'd swop talent with Michael Kenna if that were possible :-)

Congratulations, it is a beautiful shot and I find myself following you as you do Michael :-)

@Hoshisato: What a deeply flattering and kind thing to say - thanks very much Hoshisato!

You know, however much they paid you for this, they got a real bargain. I'll bet you twice your fee that Michael would not have got out of bed for three times your fee.

@John Leech: Hi John, Yes I got the cheque last weekend! (I updated the Flickr thread a couple of days ago) I saw one of Michael Kenna's photos for sale at Ikea last time I was there which was a big surprise. The other thing that surpised me was the poor quality of the print. It came with a nice bevelled thick white card mount and it looked like more care and attention had been spent on the mount than on printing his photo. The print was on sale for a fraction of the amount that I got for this one usage license but I guess he gets a fee on every print they sell (which must mount up a lot over a year)

@Scene by Sharon Photography: Thanks Sharon!

Another great shot Ian. Love the tones and the effect of the long exposure.

What a great success! (No wonder with this stunning photo.) Congrats, Ian!

@MadScientist: Thanks very much!

Congrats on the photo use, also an amazing shot

Great work my friend!!! I'm so proud of you! And yes, this is a masterpiece!

Brilliant shot Ian! This is a masterpiece and my sincere congratulations to you! Well deserved!!

Congratulations and well deserved!
You made the place look so mystical and magical with your processing, wow!

You so deserved it! My best wishes for many more great photos like that and awards!

Just perfect! I love it!

Gorgeous (and I never thought I'd say that about a power station).

Magnificent!!!! I just love your photography! :))