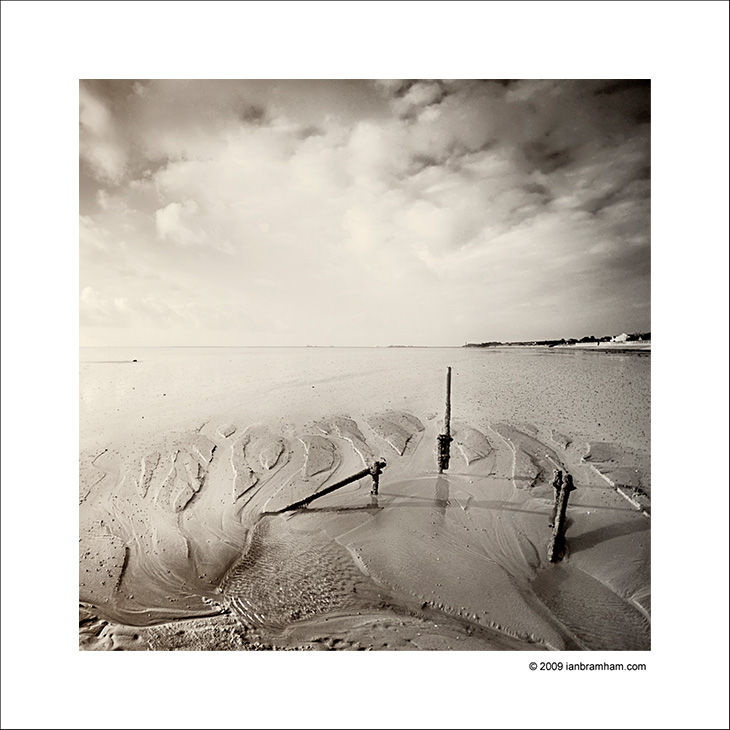 Posted by Ian Bramham (Manchester, United Kingdom) on 15 May 2009 in Landscape & Rural and Portfolio.

Another one from the archives from Morecambe Bay in NW England.

This is a variation on a photo that I posted back in December 2008:
Previous version
The photo was taken at the end of October in the hour after dawn with the low morning sun reflecting on the sand still wet from a sudden rainstorm and the ebbing tide.

Although you can't really tell from the photo, it was very stormy weather with winds of at least 30mph. The fast shutter speed was my attempt to compensate for the fact that I couldn't hold the camera steady enough.

I've decided to enter the 'Cool Photoblogs' annual competition again this year. I'd really appreciate a vote from any of you who like my blog and who feel up to going through the registration process that is required in order to be able to vote: 2009 Photoblog Awards

Beautiful high key in this shot. You don't miss a beat on any of the detail, this is an amazing shot. Compliments.

A minimalist approach to this place. Well composed and with a dramatic mood.

lovely framing and detail -- and wonderfully minimalist as Mirko stated too!

Some really interesting details there. That brightness really works.

Love the details on the sand and the bright light works well!

Nice. I do prefer this one over the previous version. The details and shadows have more contrast. I like this crop too.

I really like this miniature delta and the quietness of the scenery. Contrasts are really great considering the small scale of the sewers.

The only hint of the strong wind is the ripples on the foreground puddles otherwise it appears quiet. I do prefer this square version with its higher contrast with more strength in the dark tones. I quite like the sky in this one too.

Both are gorgeous and wonderfully atmospheric!!! Mavelous work Ian! (Oh I have been moving back and forth... I seem to love the tone of the previous version but prefer the composition of today's:-))

Nice to revisit the place.

I love the zen composition and the softness of tones !

Much better than the previous (composition and tone) but one can only say that after you give us the choice of two brilliant shots. I still marvel at how your eye allows rules (horizons /thirds) to be broken so easily without any damage to the overall iamage.
(couldn't find your DPR result...but am I surprised after your run of form that now sees the govt as one of your paying customers!!!!)

@Ted: Thanks Ted...here's the DPR link by the way: http://www.dpreview.com/challenges/Challenge.aspx?ID=1897

Yes, the government usage is a nice one to have!

I love the processing and depth of this picture. Great work!