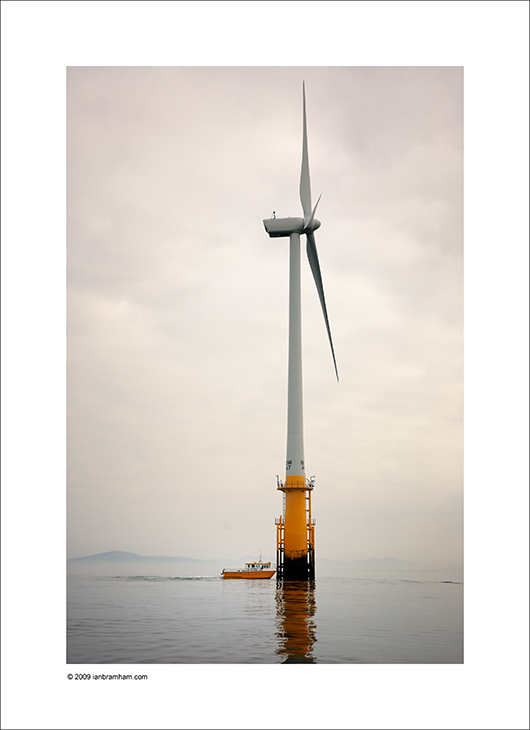 I'm showing a series of photos for the next week or so that I took for a fantastic UK company called 'Wildcat Marine' who specialise in providing personnel transfer vessels to windfarms and other offshore operations.

The photos were taken at an offshore windfarm in the Irish Sea off Barrow in NW England.

The boat that is docked up against the turbine is Wildcat Marine's purpose designed 11m long catamaran.

It's nice that you've landed yourself some work and I'm looking forward to seeing more of the set. I've been given the job of photographing an album cover which I'm looking forward to. It feels good to be taking photos for a purpose other than just personal enjoyment. It's interesting how different people see things differently and frame things differently. With your photo, applying rules of thirds I'd have put the windmill/turbine further over to the left of the frame. For Wildcat Marine this may have worked very well as it would have left a large amount of space to the right of the frame which could be useful for adding text.... Ideal for an advertising poster. Tell me to shut up if I'm talking utter rubbish :)

@Mike: Mike, it's literally only in the last 3 or 4 months that photographic composition has become an instinctive thing for me so I'm not yet at the point where I'm thinking about leaving space for print etc :-). Maybe that will come in time with more practice. At the moment I'm just happy enough that basic good composition has become instinctive enough so that I was freer on this series to concentrate on the technical side of things like making sure my shutter speed was high enough (I'd never photographed one moving boat from another moving boat before!) Good luck with the album cover....it sounds really exciting!

The boat sure makes the turbine look impressive.

Neat! Again, the boat docked there helps put this into scale. These things are enormous.

This made for a really beautiful photo. Plus it's interesting as I've never seen one of these in the water before. Very well done!

Good shot, never realised how big these things are.