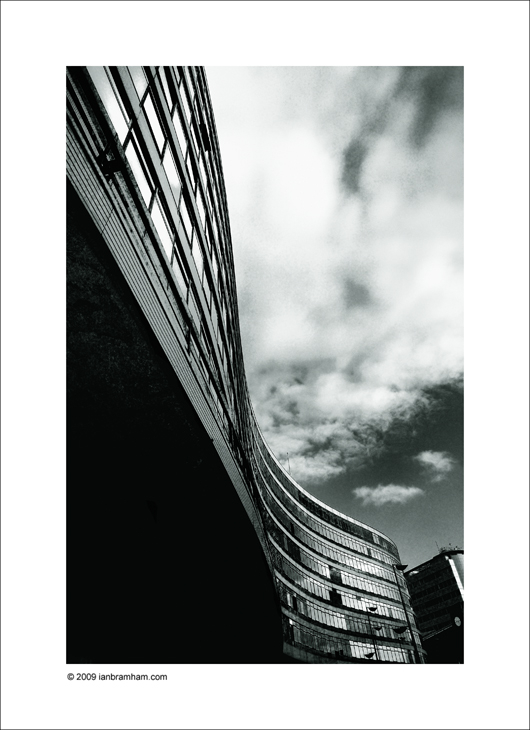 Posted by Ian Bramham (Manchester, United Kingdom) on 20 March 2009 in Architecture and Portfolio.

This is another photo taken in the Piccadilly area of Manchester. I've often admired the elegant curves of this 1960s office building which is next to Piccadilly railway station.

Many poorly designed buildings were erected in the UK in 1960s but I think that this one, designed by Richard Seifert & Partners, has a grandeur and beauty that is timeless.

Thousands of commuters walk past this building every day....I wonder how many of them take a second to look up.

Such a fine appreciation. Thanks for sharing.

you surely know how to let other appreciate an architect's work, well done (both the building and your photo)

Perfect point of view. Won't be long before you are into tilt-shift lenses and LF digital backs. best...jerry

I agree with you regarding the elegant curves! you've captured them well with a super composition and light!

This is stunning!!! What a wonderful interplay of forms and tonality!

The way you have used the wavey structure to create depth in this image is just perfect!

I love the graceful lines of this building. You did a good job with this composition.

Perfect frame angle, light and compo. This is a great architecture shot!!

Really enjoying the architects tour of Manc...please sir, can I have more?

I've been looking at this one for days and can't make my mind up on it. Something isn't working for me, though I do like the drama and initial impact. I can only think it is the other building to the bottom corner - and I do like Torsten's suggestion for an ND.

I love these sweeping lines!

I just love your vantage point in this shot. The curve of the architecture and the way the light follows along is beautiful.

It's a very flattering photo though - I used to work in this building and I'm afraid it does not live up to expectations on the other side of the glass! Nevermind.

@Sue Love: Thanks.....yes, I agree that it's showing it's age on the inside but it scrubs up well in the areas that have had a refurbishment. I'm an architect by profession and recently we refurbished part of the interior for one of the tenants and it looked and worked a lot better afterwards.