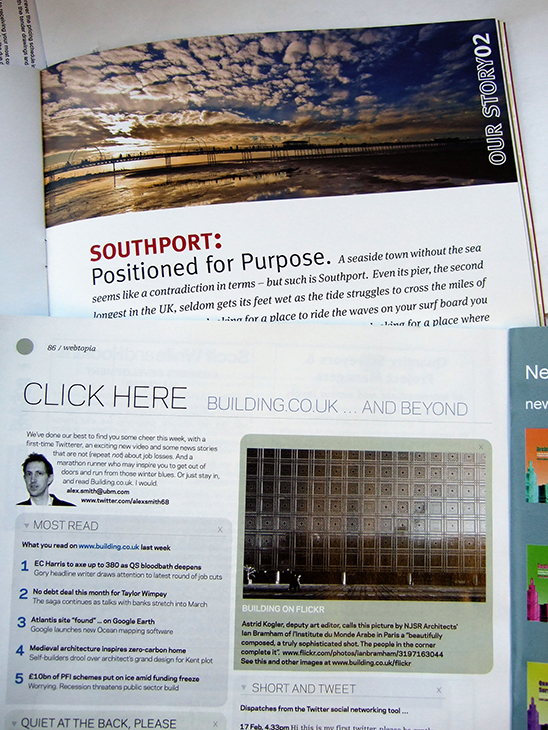 My First Photos in Print!

Posted by Ian Bramham (Manchester, United Kingdom) on 6 March 2009 in Miscellaneous and Portfolio.

I saw two of my photos appear in magazines recently...the one at the top, Southport Pier, was published in 'Restoration' magazine and the B&W one of L'Institut du Monde Arabe' appeared in last weeks 'Building' magazine.

It's quite a strange feeling seeing your own photos in print.

Thanks Beth and Astrid!

Congratulations on the printed photographs!

Oh...I forgot to say that I am a huge fan of Hugo Poon. I have never seen John Leech but will head that way now. Thank you for sharing.

Congratulations, I'm really pleased for you. Two of many more to come I expect!

Congratulations. Remember that we were fans and visiting here long before you became famous! :) Shows we have good taste. Keep up the good work.

Congratulations Ian. I'm happy for you.

Well done for the publication, it must be a real treat to see your work in this fashion, have been looking at your PF, very interesting and varied work, impressive to say the least, I will continue to monitor your work

congratulations! i wish you more and more appearances!

Oh MyGod, I'm so thrilled for you, I recognized them immediately...WOW BRAVO Ian x

@Lorraine: Thanks for that Lorraine!

@Momo: Hi Momo....thanks very much. I realise that this kind of thing is probably a common occurrence.

Great job. Both are excellent photographs. The one on the bottom was published on your blog not too long ago if I remember right. I used do some stuff for an ad agency so at one time I was pretty used to seeing my stuff in print, but not in this way. I remember the first time I saw mine I was like "how f'n awful is this?". It's great that you got photos you WANTED to take published. That must be an entirely different feeling. Great job.

@613photo: Thanks!....yes it's great that they were both photos that I'd taken for myself (not that there are many of the other variety :-)

Highly deserved, congratulations! I think it was just a matter of time. :)

@MadScientist: Thanks for that!

Congratulations Ian! I'm so happy for you!!

paulski from Muncie, IN, United States

Wow, if a guy like you has only two photos in print with your body of work, what chance do the rest of us have? Congratulations.

@Twelvebit: Thanks!....If someone had told me 18 months or so ago when I started this blog that I would eventually see some of my photos in print i wouldn't have believed them so it's a great feeling :-)

@jim: Thanks very much Jim!

Congratulations Ian!!!!! Feel so happy for you... Alot more to come, I trust.
I'm so proud to have known you before you became so famous!:-)

My heartfelt congrats on both! Fantastic work. I'm more suprised that this was the first time. Your photos certainly do deserve attention.

@Mike Paulison: Thanks Mike....to me it all seems to be happening quickly :-)

@Virgil: Thanks very much Virgil!

@Alfredo J. Martiz J.: Thanks for that Alfredo!

it's nice to see that a wider audience can enjoy the result of your passion.
No doubt we'll see more of your work appearing in magazines etc in the future.
Congrats!

@Ted: Thanks Ted....I really hope that I can continue to make progress with my photos.

Good on you mate. Well-deserved I reckon. Carry on, Sir!

@Stu: Thanks very much Stu!

Congratulatios, you well deserve it yuor work is outstanding and beautiful.

@photo machines: Thanks for that!

Congratulations. I bet you are excited. I had my first National Magazine shoot last year and it was incredible exciting (as well as very well paid.)

@Michael Rawluk: Thanks Michael...how did that come about? It sounds fascinating!

Congratulations, I know the feeling you get when your stuff gets published.

@Andrew: Thanks Andrew...well,it's a first for me!

Congratulations! I love that photo with the clouds!