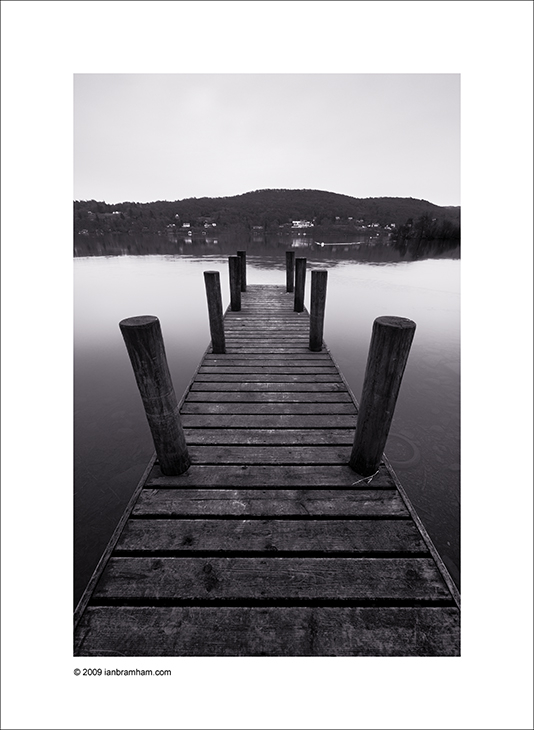 A wooden jetty at first light on Lake Windermere a couple of weekends ago.

This was taken during a 12 hour photoshoot in the English Lake District with John Leech. He's now joined us at Aminus3 and you can find him here: John Leech

Now this is a classic image. Nicely presented too.

This looks slightly darker and moodier than the flickr version. Is it a different version, or is it a trick of the backgrounds? At first sight I preferred this one, though licking between the two the flickr one does feel a little richer in detail so I'd favour that one.

You'll now say that they are identical!

Your photos are wonderful, great perspective and use of contrast...
I've seen all your portfolio and i must say that you've great eye.
I'll be frequent visitor!

Jeff, John, Anna and Darietto.....thanks for the comments!.....for some reason Aminus3 is not letting me post direct responses at the moment....hopefully the problem will sort itself out later.

Beautiful! I wonder what it would have looked like from a lower perspective, but I'm sure that you picked the right composition in the end as this photo of Windermere looks stunning.

@Hoshisato: Thanks Hoshisato!....I wish now that I'd tried photographing this from futher back with a telephoto lens to see what difference that made to the composition.

Nice composition and b & w

love it - absolutely love it!

@Scene by Sharon Photography: Thanks Sharon!

One of those that would fall into the anals of Classics...am having same trouble responding to individual comments!

@Lorraine: Thanks for your note about the problem Lorraine....I'm pleased to see it's fixed now and seems a quicker process than before, so maybe improvements were being made to the system.

good one Ian! the perspective is terrific!

@Cheryl: Thanks Cheryl...I had reservations about the perspective distortion.

A fine composition and toning. Thanks for reminding me on a trip to the Lake District a few years ago.

@Mirko Herzner: Thanks Mirko....I hope it brought back happy memories!

@Laurie: Thanks Laurie!.....yes, Windermere is a very beautiful place, especially in the quiet of dawn like this.

Yes, another b&w classic... love the perspective and tone. So glad that John is here at last.:-)

@hugo poon: Thanks Hugo! Yes, I'm so pleased that John has joined us here at Aminus3

@Lee: Thanks very much Lee!

I've been having another look at the two versions. I copied them into photoshop to see if the sites physically alter them in any way - absolutely identical. So I think had two browser windows open side by side - and though very subtle, the two images do appear different. I fiddled around until the two were absolutely on top of each other, and flicked between them - again proving that they are identical. There's certainly on of those optical illusion effects coming into play. Not something to write a thesis on, its very slight and I'd have difficulty in describing it (or if I have a real preference) - though even with the generous white border on the image the background website is altering perception to some degree.

By the way, I found I couldn't reply to messages today unless I right clicked the edit icon.

@John Leech: I've heard that different browsers have different effects when viewing photos on the web - perhaps that's the reason? The differing background colour must have an effect too.