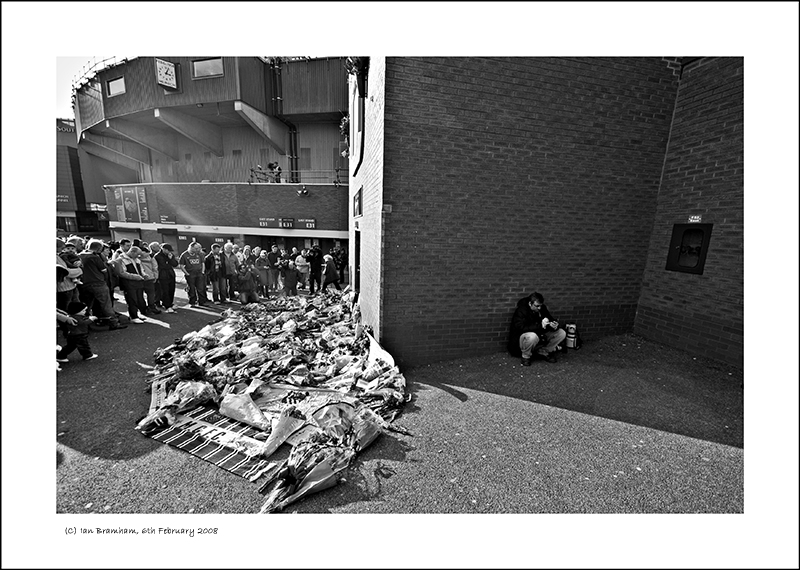 For the first 3 days of this month I'm posting some B&W street photos in response to the Aminus3 theme organised by Damon Shreiber http://electro.aminus3.com/ here's his request:

"I'd like you to spend 3 days posting your best street photography in black and white. Street photography is generally understood to include images taken (usually - though not necessarily - of people) in a candid public setting such as a sidewalk, often with a normal to wide angle lens.

So if you're interested, get out there and capture some decisive moments! If you are interested in participating, let me know through my contact link and I will add your name to the list when it's time."

This photo is one from my archives and was taken around the corner from my office in Old Trafford, Manchester and shows the crowd of people gathering to commemorate the 50th anniversary of the Manchester United FC Munich air disaster which killed 23 people. http://en.wikipedia.org/wiki/Munich_air_disaster

Powerful shot Ian! I like the contrast of the lone man, and the flurry of people on the other side of the wall.

@bluechameleon: Thanks Sharon....did you also see little child on the extreme left being ushered toward the heap of flowers?

Great composition and b/w. It was a tragedy, unforgettable.

@Paco Díaz: Thanks Paco...I greatly admire the work of the great 'street' photographers but it's not something I find at all easy.

A tragedy showed in a good composition

@Marie LC: Thanks Marie...despite (or maybe because of) the extreme wide angle lens I used I was still very happy with the composition of this one. It will probably mean more to the supporters of MUFC but there's a lot included in the photo: the 1958 commemoration clock top left in the picture; the Manchester City scarf left on the ground in respect; the small child being ushered forward by a pair of hands toward the pile of flowers and the apparent 'indifference' of the press photographer with his white Canon 'L' lens.

It's the first time that I've ever felt like I've captured one of Cartier-Bresson's decisive moments in 'street' photography.

I remember this Ian, the crowd, the solitude, raw emotion...just a very strong photo in all respects...

Excelent ! , one of the best I´ve seen so far in the first day of challenge.
I really would like you to try more street photo !!

@Hikari: Thanks but I don't have the courage or 'bottle' to be any good at 'street' photography. Photographers like Bruce Gilden have so much nerve I can barely even watch a youtube video of them at work without cringing in sympathy with the people who are the subjects of his work: http://uk.youtube.com/watch?v=kkIWW6vwrvM

A powerful image Ian! Like how you split it in two different scenes.

This is superb, Ian! Such a powerful interaction between the contrasting moods, lighting and emotions that leads each element to its maximum of expression! One of my favs of the day!

Perfect choice for this contest, Ian. An amazingly strong image which carries a lot of emotions...

Bravo for this shot! Collective commemoration and individual isolation. A certain ambiguity!

Humorous and sad in a way, Ian. Someone is perhaps too touched or too uninterested to take part.

very powerful. especially that man off by himself

I agree with the others - very powerful capture!

A scene of life moving and so lived by deep by their heart by the population. The wide-angle lens is extraordinary here in its use, and makes it possible to appreciate the popular movement like the lived individual one ;)

Strong emotional photo. And thereto a strinking contrast with the sitting man.

Such a strong, detailed image. I'm afraid the 800 pixel format here makes it hard to see everything going on, so I'm in your debt for the explanation of things I would otherwise have missed. I'd love to see it higher-res. As it was (and not being familiar with the disaster) I thought at first that the flowers laid out were a bit of wrecked fuselage from the plane. I also didn't recognise the man on the right as being a photographer - I thought he was just a guy crouching with a can or thermos.

But that's the great thing about complex works like this is that a close reading can be so fruitful. Thanks again for sharing it. As to street photography in general, you don't have to be like Bruce Gilden to be successful. I think Cartier-Bresson generally put a bit more distance between himself and his subjects - and he wasn't exactly an also-ran!

Marvellous image! You made a perfect composition to reflect the emotions.
Great job!

Makes me wonder about the lonely man to the right. What's going on in his head. Great capture!

The involvement of that lonely man on right in this shot is significant.

Nice shot. The wall down the center and the different things happening on each side give this a two shot feel. The clarity and smooth tones of the black and white are perfectly done.

Every time I visit your gallery you are better and better. This is fantastic street shot! Bravo!