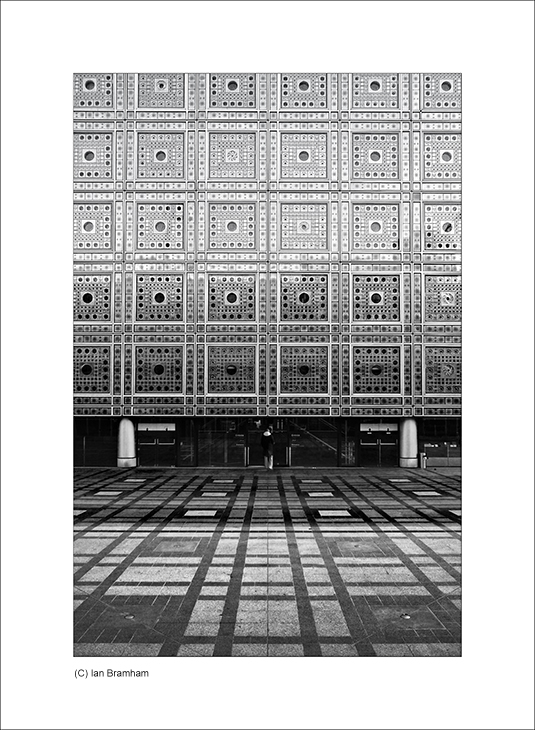 Posted by Ian Bramham (Manchester, United Kingdom) on 15 January 2009 in Architecture and Portfolio.

This is the building that made him famous - well, in the architectural world at least :-)

The fascinating bit for me about this building is the moving brise-soleil facade which, rather like the lens of a camera, controls the amount of light entering the building.

If you look closely you can see that some of the squares are more open than others. The centre of each square is just like the aperture blade system of a camera lens.

Here's Wikipedia's description: "The motifs are actually 240 motor-controlled apertures, which open and close every hour. They act as brise soleil to control the light entering the building. The mechanism creates interior spaces with filtered light — an effect often used in Islamic architecture with its climate-oriented strategies."

@Laurie: Thanks Laurie....I liked the way that the architect had carried the geometry of the building through into the external paving.

Excellent graphic image and, of course, your composition is perfect.

@Suzanne: Thanks Suzanne!....for such a geometric building the composition was surprisingly difficult and I struggled a bit trying to take photos of this building.

I've got a several more photos to follow over the next few days.

The strict geometry comes into its own by the head-on perspective. I really like the composition.

Architecture Masterpiece, Nice and balanced composition, giving you a sense of approach to the building and also guiding you to the facade motif!

wow, very nice image and composition. thanks for the explanation, very interesting!

great tonal range
good graphical compo
thanks for the notes