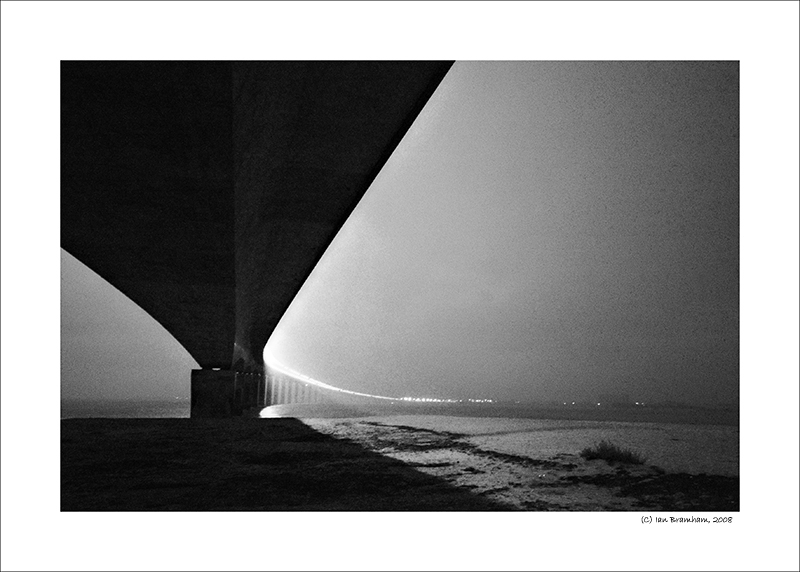 Bridge in the Mist

Posted by Ian Bramham (Manchester, United Kingdom) on 28 August 2008 in Architecture and Portfolio.

Taking shelter from a rainstorm at night under the toll bridge from La Rochelle to the Île de Ré on the French atlantic coast.

I've got a lot of photos of this bridge which I want to show you eventually - the others were all planned shots but this one happened almost by accident as I had to abandon a long 1/2 hour exposure tripod mounted photo that I was taking down by the waters edge and run for cover from this sudden rainstorm.

Ironically, although it wasn't planned, it's probably the best shot of the lot compositionally and I even like the graininess from the high 1600iso as I feel it suits the mood.

@dj.tigersprout: Thanks...it was the curve which I liked the most.

I like the angle that you chose. Somewhat mysterious as well.

@Ana Lúcia: Thanks....the angle was accidental as I ran to this point which is next to one of the big support pillars to take shelter from the rainstorm. (Sometimes I am just lucky :-)

Stunning compostition! It almost looks like a peace of art. The grain fits perfectly.

@Mirko Herzner: Thanks Mirko!....I loved the curve of the bridge at night once the lights came on which is what made me want to photograph it nearly every night that we were there.

@yz: Thanks yz...the curve of the bridge is lovely isn't it!

I totally agree with everything you've said here. It's an amazing composition, the grain is right and the mood is stormy/somber. Your shots are amazing.

@Viewfinder: Thanks Glenn..that's very kind of you!

Hi Ian... I really like this image a lot. The atmosphere, framing, composition and the fact that its in B&W all work so well together. You'll often find that when the weather is c**p it can be ideal for photography - allowing you to capture things that might otherwise seem mundane (not that this bridge is anyway mundane). The lighting too seems to bounce off the wet air to give a unique 'misty' experience. Its a great thing about shooting digital - you can take as many shots as your memory card(s) allow, of things that 'might work' and you'll often be surprised at what you have at the end of the day (its the fun factor of photography IMO - if you get too serious you'll end up shooting less and less...).

@IanSmith: Thanks Ian!....I'm really pleased you like it as I think it's one of my better photos, although I realise it won't be to everyone's taste. I completely agree about the value (and fun) of photography in bad weather and it's something that often inspires to get out with the camera despite the difficulties.....it's that feeling that I never quite now what I am going to get out of the camera. Often it can be complete rubbish but sometimes like on this photo I get a lovely surprise.

IanSmith said it all, but it's possibly better than that. best...jerry

@ordinaryimages: Thanks very much Jerry....I'm really pleased that you like it!

@Paolo: Hi Paolo....misty conditions like here can be very photogenic can't they!

The Curve into Heaven, oh man this is stunning! I love it so much...Like a divine light at the end of the tunnel or the beginning of the bridge lol sorry I haven't been around, I've been through this horrible thing called 'cleaning'

I loved the curves of this bridge, especially at night when it was accentuated by the lights on the roadway.

By cleaning I assume you mean the hard drive of your PC?

@Rui: Thanks Rui!...I was very lucky to be able to take this photo given how hard it was raining.

Impressive shot! I like the massiveness of that bridge and the mysterious atmosphere you created here.

I agree that the graininess only adds to the photo's power. The composition is also really fine, with that lovely arcing line. Nice work.

Nono the mood is fantastique