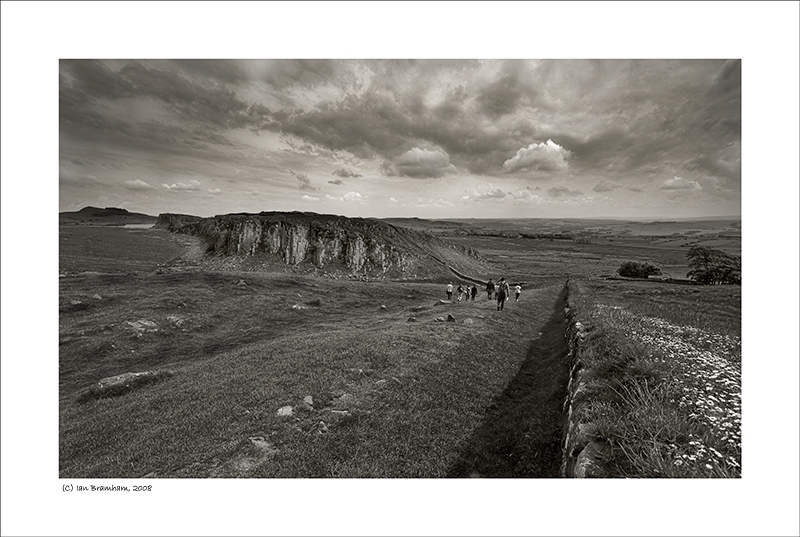 This is the view of Hadrian's Wall fron the car park at Steel Rigg. The wall follows the line of natural escarpments wherever possible - you should just be able to see the wall continuing at the top of the cliffs in the photo. The wall would originally have been 2 or 3 times taller than the shoulder high remnants in my photo.

For those of you who may not of heard of Hadrian's Wall, it is an 80 mile long stone and turf wall built about 2000 years ago by the Roman Empire across the neck of Northern England and marked the boundary of the empire. It was built to stop raids from the unconquered tribes further north.

Great photo Ian. I love the cloud formation and the people add interest too.

@Mike: Thanks Mike....I feel I should have done better with this as it's a beautiful area! (sometimes it goes like that though)

Shun from Mühlheim am Main, Germany

Back to black & white? This is another great shot!

Construction on the wall began in AD 122 and took around 6 years to complete.At it´s highest point the wall was 20 ft high and at the widest around the same.The Second,sixth and Twentieth Legions were all involved in building the wall.Around 10,000 troops were posted on the wall(mostly auxillery infantry and cavalry.Hadrians wall was occupied until the Roman withdrawl from Britain around 410 BC.
I do love my Roman history,thanks for a great photo of the wall(sorry for waffling on though).

@Anthony Lambert: Thanks for the background Anthony!

Wow this is Magnificent, great, great mood...feels like the end of the world, with the travelers wondering what happened to all the monuments? lol I love it

Great shot!
(In Germany we have a similar structure that is still active: it's called 'Rhine river' ;-)

Beautiful landscape with a nice perspective !

Ian, excellent capture of such a spectacular sight!!!

Oh my friend, I'm delighted to let you know that after following your photoblog here these days, I was finally inspired to start one myself (http://hugopoon.aminus3.com/)... This seems to be a great place for photo lovers!:-)

I hope you'll enjoy it here as much as I have done over the last year that I've been posting photos here.

reading your explanation helps SO much when viewing this image!! thx very interesting. nice lines

@Cheryl: Thanks Cheryl!....I'm never sure just how much text to put alongside my photos but this one clearly needed some explanation.

beautiful place for a stroll

Very nice B&W as usual, Ian. I like the tones a lot. The gray is very specific in all your photos. Is it a simple conversion or you use layers? I guess the green when converted will pick that very cool and crisp gray. Or I might be wrong...

@Nataly: Hi Nataly!....with regard to my B&W conversion technique I got Photoshop CS3 about 2 months ago so all my recent photos will have been processed using CS3's fantastic dedicated conversion tool which is really easy to use and a lot of fun. After the basic conversion I add contrast using the curves tool and sometimes a dose of USM using a large pixel radius which adds contrast rather than sharpness.

Another tip would be to use a digitiser tablet and pen rather than a mouse as it is a much more accurate tool when you need to be precise or subtle with selection of areas of the image where you want to apply contrast or dodging & burning etc.

@drum: Thanks very much Drum!

I'd love to walk along this. Your photo is the next best thing.

It's always hard to say something about your pictures ..... Just another amazing one !