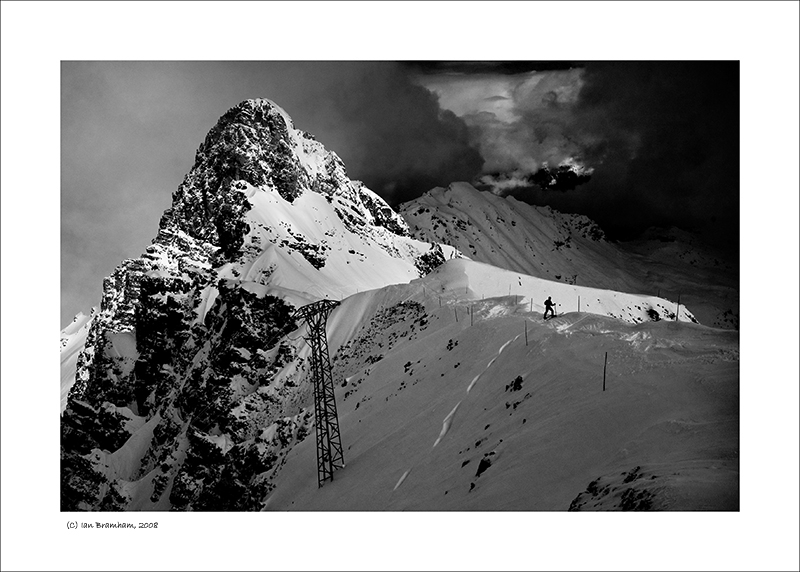 This is an image from an Easter ski trip to the Alps thatI've just processed for the first time for an informal web based photo competition which had as it's theme: "the Human element not as the “center “, the main subject of the photo, but as a meter of scale, or an emotional touch"

Some of you will remember a very similar photo that I posted here on the 2nd April but I think that today's has better separation between the figure and the landscape.

A super play of light and shade. A great image, Ian.

What a superb shot of the mountain!!!

Stunning shot !! the b&w mode is great in this shot .. lovely mountain photo !
thank you

Oh...very masterful, I love the sky, the mood is striking, snow and all, one of my favs...sigh

Wow! this looks great! keep up the good work~

I liked the previous one back then but I think this is a more refined photo, you actually feel more the relation in the diversity of scales in the photography and represents well the idea of how small compared in a macro scale yet how we want to impose ourselves to nature. Composition and processing in this one has been more refined as well, it is a balanced photo and dramatic in content. Good luck in the competition!

Very beautiful BW. The person gives it a really nice touch. Those clouds at the back look very dark!

Very dramatic image, it's not easy to decide if this is the better or the one from April. Maybe this one here, because the person doesn't look so relaxed like in the other one - but both are really impressive!

Very impressive. Among others, the thing that strikes more is the quality of the detail of the background peak, although already under the shadow of the storm.

Yes the other shot was very good, But this is even better

I can only come up with one word: grandeur.

Nice B&W image!
the mountain is capture in the best light!

a wonderful shot! your landscapes are exquisitely sharp and detailed... what is your secret? i assume these are all taken with a tripod? i think your lens has a much better resolution than what i am using. bravo!

@dj.tigersprout: Thanks!....there's no real secret to the sharpness issue that you describe ( I assume that you follow the Aminus3 guidlines for re-sizing that are described in the forum)

This particular lens is very sharp - It's a Sigma 10-20 wide angle zoom and my favourite lens by some margin. I post process all my photos in Photoshop to get the most out of them but I never apply any extra sharpening, although for B&W shots I almost always enhance the contrast with the 'curves' command or using USM with a radius of 50 pixels. I think correct contrast and getting a good tonal range in a photo is important for the depth of the image and can go a long way to giving the impression that it is more detailed and sharper than it really is.

This was handheld by the way, as are all my daytime photos. It was taken with a shutter speed of 1/1000th second and there's not much to be gained in using a tripod at those speeds with such a wide angle lens. There's an awful lot to lose though in terms of compositional flexibility and speed of reaction to the light and events.

Excellent composition, light and contrast. Good luck for the compeetition.

@akarui: Thanks Akarui....it's Tuesday now and I've heard that it came 3rd.