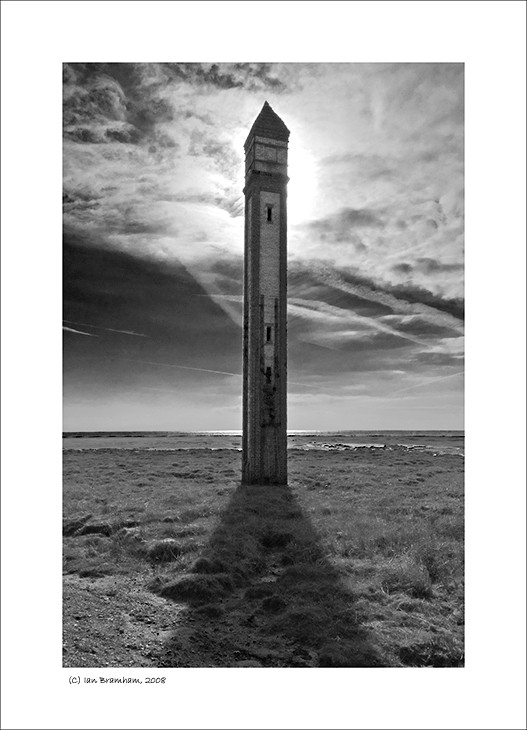 Posted by Ian Bramham (Manchester, United Kingdom) on 27 April 2008 in Architecture and Portfolio.

....at least that's what this image conjured up for me. The truth is a little less poetic as it's really a victorian lighthouse on the north side of Morecambe Bay in NW England.

Here's some Tolkein from "Lord Of The Rings" while I'm in the mood for drama :

@hugo poon: Hi Hugo....believe it or not this image has been sat mouldering away on my computer for ages as I didn't think it was salvageable.

Because I took the photo looking directly into the sun the difference in exposure values between the sky and the sillouetted face of the tower was huge and without post processing in Photoshop the tower was just a solid black with no detail at all.

It's amazing what shooting in 'Raw' format and photoshop will do to bring out detail in shadows isn't it!

:) I love "Lord Of The Rings" !
And I love this image. Excellent play with light and shadows, very attractive take.

Perfect. I just watched the trilogy again last week. Perfect. (and this is what I meant by saying a previous scene looked so "English" -- just didn't want to come off as the only LOTR junkie around - glad you're conversant).

@Viewfinder: Thanks very much....I guess for photography we are very lucky in England. I long for meditteranean light occasionally but I wouldn't swop it for the variety that we get here with the varying seasons, landscapes and architecture.

Well God didn't hold back when he bestowed talents to you...I'm always so in Awe :)

It's a straightforward photo really....who could pass by this scene with a camera in their hand and not try to photograph it!

A hugely strong, almost symbolic image, the tower is casting its shadow to confirm its presence.

@Observing: Thanks!...I hadn't quite read that much into it but I did love that shadow. taking photos into the sun is great fun with this Sigma 10-20 lens!

You certainly got it right here. Excellent.

I love the shadow on the ground.

It seems so symbolic, different shape for a lighthouse.

@JoeB: Thanks!...yes, it's very tall & thin isn't it!. Apparantly all the other ones of this design were demolished. This one was going to be treated the same way until local residents campaigned successfully to get it saved.

Sorry, but Saruman moved his tower to a ranch outside of Waco, Texas. Great shot though.

Staring at the sun really makes it great. I really like the shadow coming along the ground toward us.

@Michael Rawluk: Thanks Michael....I used the tower to shield most of the glare but this 10-20 lens loves taking photos into the sun.

Love the light in this!

@Ian: Thanks very much Ian!

Fantastic shot, Ian! The Glowing Tower and the "face" in the upper left corner... The title feats perfectly!

and still I bet you'd find something to photograph ;)

and looking back at Nataly's comment, she's right, there's a face whoa...

Ahh....a geek after my own heart. Another super shot. I absolutely agree about the power of shooting in RAW. Do you do your night shots in RAW too? I gave up on it for a while but went back to it.

@Stu: Hi Stu!...yes I've shot everything in raw since getting this D40 at the turn of the year. I love raw mainly for it's control over white balance but the extra dynamic range comes in habndy as well sometimes.

All of the posts I've missed are fantastic... but this one really pulls at me. Truly amazing, Ian!! A little flight of fancy with the LOTR... but brilliant. Started with The Hobbit myself when I was 11yrs old.

@amy: Thanks Amy....I think I was about the same age as you were when I read The Hobbit for the first time!