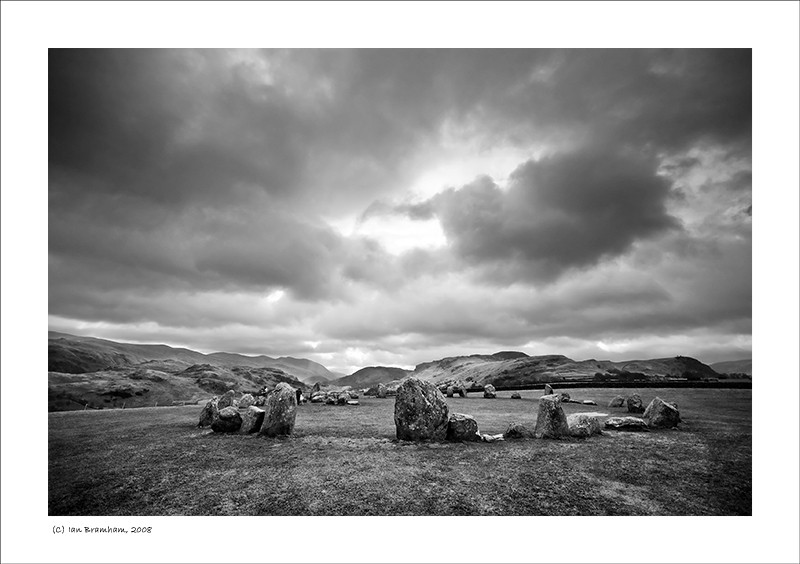 This stone circle in the Lake District in North West England dates from about 3,000 BC.

I used an ND Grad filter on the camera to get this sky but it was a really stormy day with intermittent rain.....I was lucky to be able to get this photo.

Stunning tones. You did a great job with the sky.

@Michael Rawluk: Thanks very much Michael!

Excellent capture Ian. Very dramatic sky and love how the valley disappears off into the misty distance. You should contact the tourist board as this is definitely worthy of a calendar or some such. Bravo.

Fantastic photo, such a dramatic feeling!

This is a spectacular view.

@Ana Lúcia: Thanks Ana....I'm really pleased that you liked it!

What a mood, I want to sit in the middle and listen...

@Lorraine: Thanks Lorraine....this place has a very special feel to it and the surrounding mountains are very dramatic!

The low horizon line is very effective in this composition at emphasizing the space and the grandeur. Though I tend to prefer your color work, this is a very fine b&w.

@GJC: Thanks GJC....I also tried a pano crop which worked as well but it needs to be viewed larger than 800 pixels wide.

@Suzanne Labbé: Well I'm still learning but I hope to produce something worthy of your description one day :-)

This is a really nice shot. The scope, the texture and the tones are beautiful. Great stuff.

@Henry: Thanks Henry....the first version I produced was very flat but someone told me to try photoshop's 'curves' tool (thanks David!) and that brought out the mid tones in the photo much better.

It is a gorgeous composition. My eye is continually drawn to that fantastic sky. The image is as magical as that place probably was to the people 5000 years ago.

@Michael Skorulski: Thanks Michael....yes, this place really does have a magical feel to it and it's easy to see why the original builders chose this site surrounded by the beauty of the mountinous lanscape.

Great image and luck very little to do with it. Love the sky and your composition. Your tones are great. Well done!

@Monte Stevens: Thanks Monte!......this was the first photo where I've used photoshop's curves command after getting a great tip from another photoblogger...it really brought out the mid tones in the photo.

@Jeffster: Thanks very much Jeffster!

@Momo: Thanks Momo...it would be great to get the chance to try some moonlit night photography here someday!

Oh how you wield that wide angle!! Fantasitc comp and b/w, Ian!

@amy: Thanks very much Amy.....first ever use of 'curves' on this photo!

Will from Gainesville, United States

How beautiful. The sky is extraordinary. Love it!

@sherri: Thanks Sherri....it was a really stormy day and those clouds were tearing across the sky at a great pace!

"this place really does have a magical feel to it and it's easy to see why the original builders chose this site surrounded by the beauty of the mountainous landscape."

It is cos they couldn't get planning permission in the valley.

How have you been keeping?.....I'm going through a frustrating patch at the moment with my photos as I don't feel I've been out enough with the camera and I'm getting withdrawal symptoms :-)

I'm going through an odd patch. I've been really busy with work, ill with flu and laid off running with a sore calf, and to cap it all I watched England turn out on the pitch against Scotland last week - or at least I saw a bunch of blokes with England shirts on, no evidence that any knew anything about the game. The positive side is that as I haven't been able to get out much I'm pretty well up to date with work, and lets face it, if England decide not to turn up this tomorrow they won't do any worse - though I'll hopefully be doing something more important, such as washing my hair.

I think I've taken one shot in three weeks, then reprocessed a couple from a few years ago. I was amused to see someone mark my shoe pic as a fave - so looked at their portfolio to see nothing but shoe pics! It was quite interesting for the first few pages... But that is one of the strengths of flickr, if it can be photographed then there is a group who appear to do nothing but.

I had a play with channel mixer for the first time since CS3, quite fascinating. I'll have to consider it as a further option for some images. How are you getting on with it? I thoroughly recommend you dig out an old nef without reference to a previous conversion and see where you go with it.

Small wonders like these are always fascinating exercises in trying to figure out a simple question: why?

The shot is another attractive creation of yours, well balanced and in just the right tonality! But it always makes the viewer think what was the use of arranging these boulders in circle....and then again it makes you contemplate the idea that the "priests" might have waited for a message from above!

A great shot. Excellent composition and the airiness, scope and scale are dramatic and engaging.

m a r t a from Spain

Great photo!! Thanks for sharing.