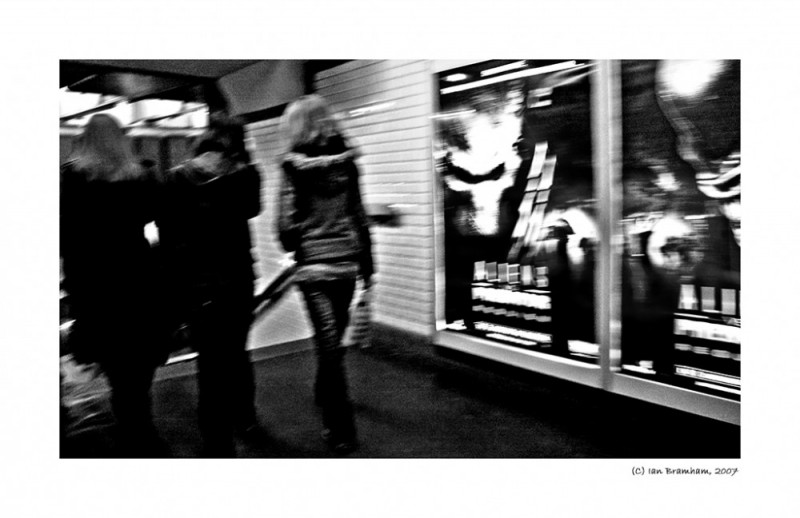 Posted by Ian Bramham (Manchester, United Kingdom) on 22 January 2008 in Transportation and Portfolio.

This is the second photo in a small series that I took recently in the Paris underground Metro system. The photos were a bit of an experiment for me....I actually took (and processed) a lot of these deilberately blurry shots in an attempt to give some idea of the movement and hurry and the endless faceless corridors.

There's a sense of menace in this shot that I didn't personally feel at the time but which was something that I intended or that popped into my mind when I saw the 'Aliens' poster on the wall.

Whether you think this photo portrays real menace or whether you think its more in the pantomime comical line of menace where you feel like shouting 'behind you!' depends on you rather than me :-)

Don't worry, this one is the only one of the blurry shots that I'm posting here as I realise that although I personally like them, they're not to many people's taste!

HOT TIP FOR ALL AM3 CONTRIBUTORS :
I've been having problems for ages with my uploaded landscape orientated images looking fuzzy and not as sharp as they should be....well I finally found the answer recently in an answer by Jason Kravitz to a query in the forums .....if you too have been having this problem the answer is to make sure you resize your photos to a maximum horizontal dimension of 800 pixels (vertical size is not limited). Anything greater than 800pixels and AM3 will automatically resize it leading to the reduction in sharpness.

Even after resizing to 800 wide some of you are reporting that you still have problems. A fellow Aminus3 contributor, Momo, left me this additional tip which you could try : "Ian... oh, you know, I complained about Am3 making my images soft and changing color and that was even with my sizing images to 800...then i discovered that all my images were in adobe rgb and not srgb...i change the profile and they're fine now...i forgot that i set my computer to automatically change my F30 images to adobe's rgb profile...i did that for work which is press work...i've gotta change that first thing ..."

Please feel free to copy and paste this advice into your own AM3 blogs as I'm sure there are lots of our fellow AM3ers out there having this same frustrating problem...it would be great to sort the problem out for as many of us as possible.

Just a bit of fun, but this is one of my favourite photos with my new DSLR. I've submitted it for publication in JPG magazine. You can vote for it's inclusion here: JPG Magazine

This blog has been 'nominated' for the 2008 Photoblogawards. As you'll see, voting is very close so you could really make a difference.... If you like it, please vote for it here :Photoblogawards.
Alternatively you can rate it here VFXY Photos or here CoolPhotoblogs

I appreciate your ability to put up a very blurred and nice shot , I like the shot and many blurred shots that I see but I have a hard time with my own. It just goes against my grain.

@See The Light: Thanks Mary!....it goes against the grain with me too which is why I thought it would be interesting to have a go at it. I always like trying new things and the blurry shots that I took were surprisingly interesting.

Sometimes, at their best, they can make the message of the photo more enigmatic which lets the person viewing it transfer more of their own emotions and experiences into what they see in it rather than the photographer trying to control everything too rigidly.

I'm not trying to say that this particular blurry photo does that but rather that the best ones do ( I was amazed to discover there are even groups on Flickr dedicated to posting nothing but blurry photos!)

I love the effect on the lady to the right...in fact, if you had cropped out the two darker figures to the left, I would have totally loved it....but like you say when you get into blurs, it becomes very personal LOL

I can't see any menace because regardless of the shapes in the window --that could be menacing-- no sense of it is reflected in the posture of the women. Without that sense of menace being palpable it seems empty. Also, perhaps, I can't escape my associations. When I was last there I didn't find the Paris Metro menacing (perhaps out of my own ignorance?). I found the London Underground more menacing, but nowhere in Europe did I feel anything like the sense of menace that I have felt many times in various cities in my own country (and though I don't reject the possibility that it was my ignorance as an American tourist that allowed me to feel relatively safe, I also just did not see the kinds of threatening things happening that I have seen at home)..

@Twelvebit: Yes, you're right....I didn't feel threatened at all either in the Metro but then again I'm a bit insensitive to that kind of thing and it was too busy to be remotely scary.
It was more the thought that a lot of people don't like that kind of claustrophobic, 'faceless corridor' type of environment and the poster was great.

@denis: Thanks Denis.....grainy and dark was the intent but it was a very staightforward conversion really.

Oh, but the blur works!! Sometimes we get so caught up in the proper technique but I'm a firm believer in stepping outside that technical box and getting on "film" what I saw and felt. That's the thing about art... it's not necessarily the technique/technical aspect but the image itself. Does that make sense? Hope so. The b/w and the blur is really fabulous!!

@amy: Thanks Amy.....I really liked taking and processing these images but I realise that its never going to be mainstream. Here's a set of them put together as a slide show if your interested.... http://photo.net/photodb/slideshow?folder_id=798107