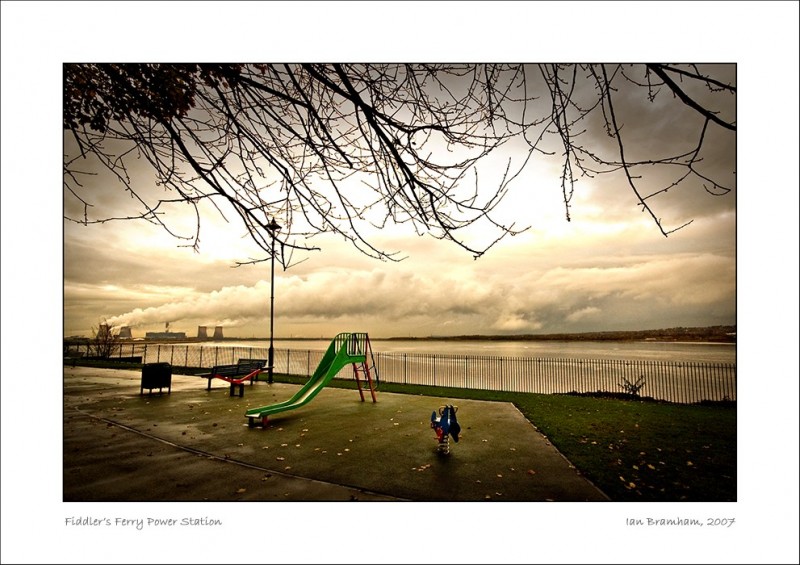 Following on from the theme of the last few days this is a photo of the cooling towers at Fiddler's Ferry Power Station which is on the banks of the River Mersey not far from Liverpool in North West England.

I found the contrast with the childs playground hard to take but compelling at the same time as I think there is something quite strange and ethereal about the whole scene....what do you think about it?

This idea was loosely inspired by the work of the famous English Photographer Michael Kenna and the series of images that he took of Ratcliffe Power Station between 1984 and 2003 : Michael Kenna

I'm travelling over the Christmas holiday period and will be away from an internet connection for a while so won't be able to return comments, although there's afew more days of photos pre-loaded.....I'll catch up with you all after the break but wish you all a Merry Christmas and a very happy New Year!

If you like this photoblog you can vote for it here Photoblogawards, here VFXY Photos or here CoolPhotoblogs

It's a beautiful image. Actually, quite extraordinary. Odd to see the contrast of the power plant and the playground.

I can see the Michael Kenna influence in these shots, and your own style too.
This shot is nicely handled, its well exposed / edited and it doesn't feel too preachy. It lets your own feelings do the talking.

It's surreal such a wonderful feeling! and yeah, all you LOL Have a wonderful Christmas Ian :)

there is something disturbing, but at the same time the 2 items of content (Power station + playground) are just real life. there is a contrast, but power station worker's kids have to play somewhere even if it is in the shadows of chemical smoke- that's probably the disturbing element.

That's a very nice shot. It makes you start thinking. I like to colors in the playground that pops out a bit.