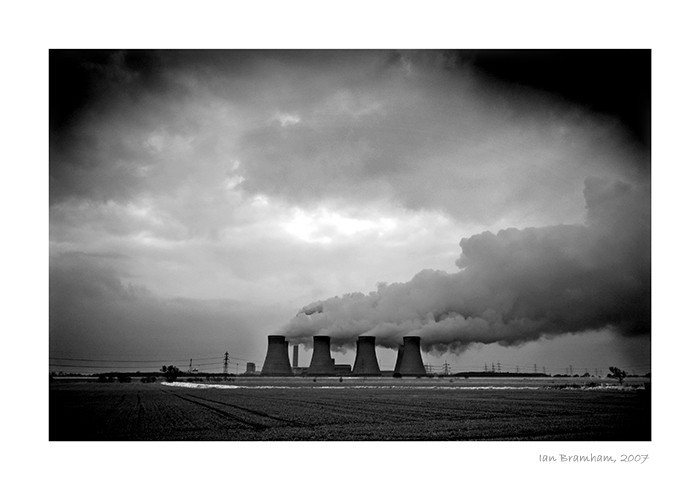 This is a photo from a couple of weeks ago of the cooling towers at Eggborough Power Station in Yorkshire, England.

It's inspired by the work of the famous English Photographer Michael Kenna and the series of images that he took of Ratcliffe Power Station between 1984 and 2003 : Michael Kenna

It's a little off beat but if you've seen the Japanese animated film 'Howl's Moving Castle' directed by Hayao Miyazaki - these power stations reminded me a liitle of that imagery....I half expected the power station to suddenly rise up and march off across the plain like Howl's castle :-)

.
If you like this photoblog you can vote for it here Photoblogawards, here VFXY Photos or here CoolPhotoblogs

i really like how youve handled the processing here. the framing also works really well

@Nick Passantino: Thanks Nick! - thats a big compliment coming from you. I've been getting encouragement from a fellow contributor to a forum on DPReview (a guy called John Leech) to think of post processing as a way of saying what I feel about a photo and this is one of my fist tries after being shown an example by John of the kinds of things that he does. Here's his Flickr site if you want to stop by and say hi from me!...Leechy at flickr

Very nicely done all around, Ian.

@El Jefe: Thanks very much - I look forward to seeing you again soon!

A couple of weeks ago? I though surely early 1940s, wonderful capture again. It's fantastic in B&W :)

You've certainly made the best out of your sources of inspiration, Ian.

If you don't mind my being a little insolent, your latest photos also remind me of Burtynsky (http://www.edwardburtynsky.com/). And not precisely the colors, but the general feel and overwhelming power.

(Miyazaki... You have such a good taste.)

@Guillermina: Guillermina - thanks for the email warning me that your comment had probably been caught by the spam filter...you were right!

Also thanks are due for the very interesting link to Edward Burtynsky's photos....yet another photographer of whom I was profoundly ignorant :-).....if you see something in my photos that reminds you (even remotely) of his work then I am deeply surprised but very honoured.

Ahhhh Miyazaki.....Anyone who has ever seen his work could never forget it!

Excellent! Glad I ran across your gallery, fantastic! Thanks for sharing.

@Dang: Thanks very much - glad you liked it!

@Dimitrios: Thanks very much Dimitrios!

@yiannis krikis: Thanks Yiannis! - I can safely say that the bit I find frustrating is the post processing because I'm so poor at it but very, very, slowly I seem to be learning....its an uphill struggle though!

@badala: Well... its mostly water vapour that you can see, but its a coal fired power station so I guess there is a certain symbolism there isn't there.

@MaryB: Hi Mary - what a lovely thing to say....thanks very much!
The new camera has made a big difference I think - well at least I feel a lot more confident and maybe it's that as well.

This one is just ethereal and kinda spooky in an end of the world kind of way...like a dream image...magic...great work Ian...

@Momo: Hi Momo - thanks very much! - If you haven't already seen it, go and buy the dvd for 'Howl's Moving Castle' which is a Japanese animated film....I'm pretty sure you'd love the imagery.

Love the tones in this - Very nice!

@Ian: Thanks very much Ian!