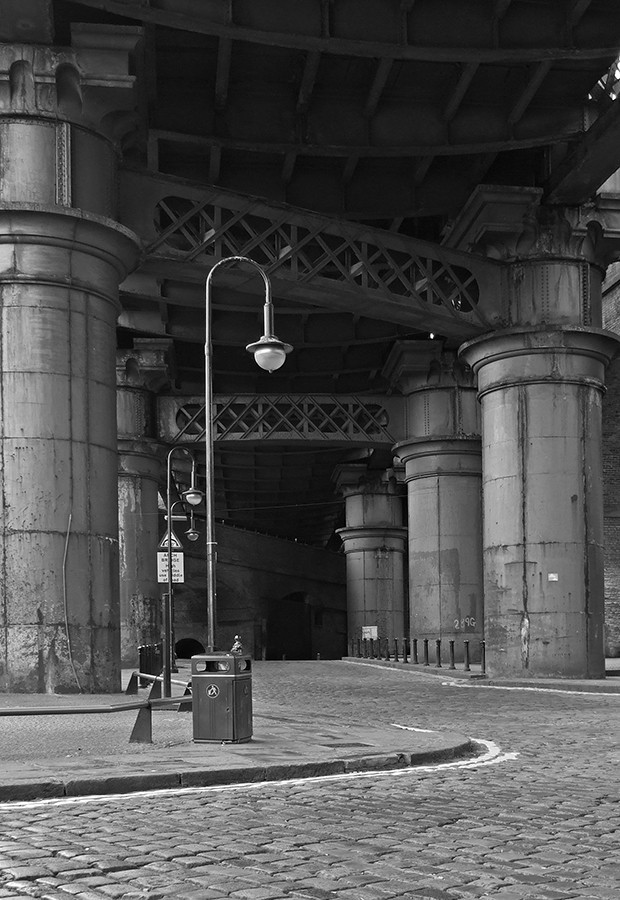 They say that one picture is worth a thousand words. I thought instead that I would try a traditional seventeen syllable Haiku poem which is rather shorter in order to give my thoughts on the photo. (my first try at this!)

The city cities were bustling with people in the streets above whilst below lay this oasis of deserted autumn streets under the railway, unchanged by time.

I like the gradation of white to black from bottom to top.

@Shuva Brata Deb: Thanks very much - thats very kind of you!

Excellent shot. You have a great eye for tones during processing.
And I like the Haiku.

@Michael Rawluk: Thanks Michael - thats very kind of you!

I really like the compositions and tones of your last images. Amazing what you can do with the little Fuji!

@Putter: Thanks putter - i love the care that you exhibit in those great street photos of yours very much too!

@Pouhou: Thanks Pouhou! - good composition is one of the things that i value most in a photo (along with emotion and interesting light if I can get it)

Lovely black and white again! The tonal ranges are excellent! Do you do much processing on these images apart from converting to gray scale? Hard to believe there are bustling streets above! Love the poem too! :-)

@Anne: Thanks Anne - recently I've been using the in-camera b&w mode in my camera rather than trying to convert in photoshop so there is not much PP apart from adding contrast with Elements5 and adding the sepia tone using the colour temperature slider in the free Picasa2 software.

Really like the placement of the lamp in this image. Wonderful b/w processing.

@amy: Thanks Amy - thats very kind of you!

Beautiful! I'm quite taken with the lines and tones in this image. Bang-on!

@Damon Schreiber: It's the most striking place Damon, but very difficult to photograph with my compact camera which has a 35mm max wide angle - its the first time I've had a yearning for a good DSLR with a much wider angle lens on it! :-)