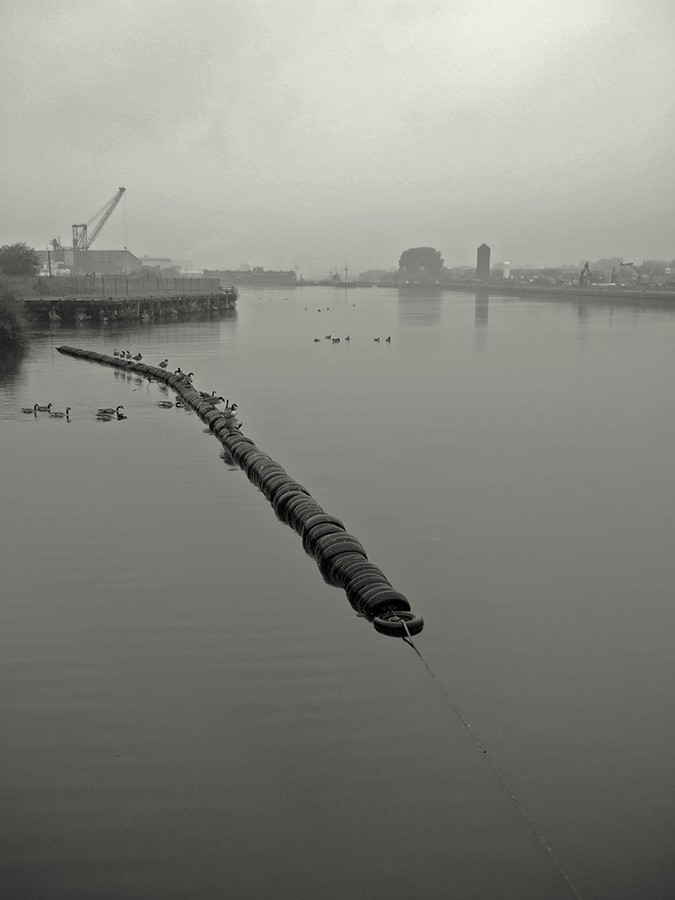 I took this photo recently at around the time of sunrise, if there had been any sun that is!

This part of the Manchester Ship Canal on the edge of Salford Quays has been heavily industrialised for well over 100 years but is now slowly giving way to new museums, apartments and offices.

The weather was not at all unusual for this time of year in Manchester with overcast cloud and heavy but very fine rain that combined to form a mist that turned the whole scene into an impressionist painter's dream.

I hope that this photo conveys to you some of the other-worldy feel that I experienced that morning.

I went to Manchester Art Gallery again recently and they have on permanent exhibition the work of some of the early impressionist painters from the start of the 20th century. This painting here of Manchester by Adolf Valette from 1912 has some of the qualities of light that I have rather clumsily tried to portray in this photo - I think the weather on that day in 1912 was the same as now and typically Mancunian!

a very nice shot. i like the misty feeling at the background. the picture looks like as though it was taken in the 1890s.

@Xuan: Thanks Xuan for your comments on this photo and the other ones! - the canal was opened in the 1890s and I would guess that fundamentally this area hasn't changed that much since then. This area is now giving way to modern high rise apartments, offices and museums - in ten years time I guess it will look radically different.

You've got that rain Ian, it's fabulous!!

@Lorraine: Thanks Lorraine - it felt like winter arrived suddenly in Manchester last week when it started raining and hasn't stopped since!

Phew! this is super!

I love images of industrial areas. I grew up on the NE coast of UK and this image reminds me of Teesport. It always seemed a magical place to me...

@Brian: Thanks Brian - I'm pleased that you liked the photo!

Another outstanding capture Ian, you have captured the atmosphere so beautifully!

great black and white shot.. great tones ian. like this image a lot.

@Nick Passantino: thanks Nick, I appreciate it.

I like your picture Ian! It is so sad... The sadness of this photo is overwhelming... It's really stirring image. Great work!

@irvin: Irvin - thank you for those kind words!

@Martine Lapointe: thanks Martine! - well I'm relieved that you do, in fact, feel its beautiful as its not a very obvious trait of this photo. I knew it is rather sombre too, but I was hoping that it wouldnt just be me who liked it.

Goodness, this is awesome! So subtle!

Great image and great spot! You should revisit it ones in a while just to see how it changes with the wether and time.

@Nataly: :-) Hi Nataly....it's just around the corner from where I work so I do revisit from time to time although there's a lot of building development going on there at the moment.