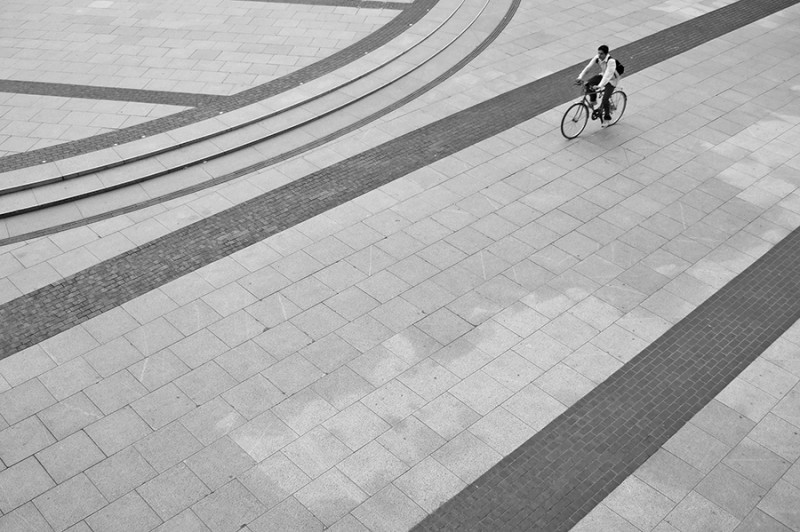 I have become less reflective and more confident as I've grown older but when I was a teenager I used to wonder often about the meaning of life and other such deep issues. Sometimes I used to look at people in the street and wonder what they were thinking and what kind of life they were leading.

I now believe its better to live life to the full while you can instead of over-analysing it.

Here's my slightly 'tongue in cheek' take on those days.

"Geometry had never been Arthur's favourite subject at school but one day whilst cycling through the city, his mind freewheeling in deep thought, the answer came to him as he slipped into a feeling of oneness and harmony with the universe - the answer to the meaning of life the universe and everything was....."

With apologies to "The Hitchhikers guide to the Galaxy" :-
http://en.wikipedia.org/wiki/The_Answer_to_Life,_the_Universe,_and_Everything

Very cool shot with all the lines. The bicyclist adds an interesting point of focus. Nice.

Beautiful lines...this is so calming

@Steve: Thanks Steve - I'm glad you liked it!

grt one....leavin a large vacant space gives a sense of movement..nice way to portray this

What great lines Ian, and gooddeep thoughts :)
ps if Ihaven't bee around, it's because of mcomputer crashing around me...stupid spyware!!!

@Lorraine: Thanks Lorraine! - sorry to hear about your computer - I hope you managed to sort it out in the end!

you have the perfecte eye, great pic !!!

@Stefan: Thanks Stefan. I was pleased with the composition but I felt that the image quality let it down - I'll probably go back & try again another day.

@Damon Schreiber: Thanks very much Damon!

Here's some more "deep thought" for you:

Slartibartfast: Perhaps I'm old and tired, but I think that the chances of finding out what's actually going on are so absurdly remote that the only thing to do is to say, "Hang the sense of it," and keep yourself busy. I'd much rather be happy than right any day.
Arthur Dent: And are you?
Slartibartfast: Ah, no.
[laughs, snorts]
Slartibartfast: Well, that's where it all falls down, of course

@Tanya: Its great to meet someone else with the same absurd sense of humour and outlook on 'life'!