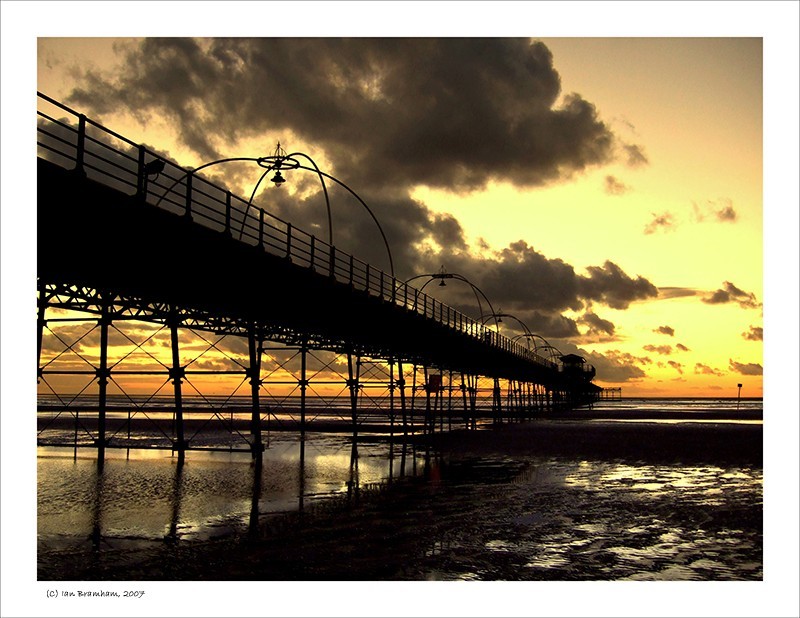 Sunset at the Pier

This photo was taken at Southport beach on the NW coast of England which is a few miles from where I grew up.

The pier dates from the 1850s and 60s. It is over 1,100m in length and is the oldest surviving pier in Britain constructed from iron. It has been restored in recent years after local council proposals to demolish it in 1999 were narrowly defeated by 1 vote.

I hope you think, like me, that it is beautiful. Sunsets on the beach wouldn't be the same without it.

Thanks all of you for the lovely comments on this photo - the response was overwhelming!

Good angle and beautiful composition, and the warm colours gives the abandond scene alot of life!

@Claus Petersen: Thanks Claus! - I was really pleased with the way the colours turned out.

It certainly is a beautiful pier!!! What a gorgeous picture.

I love piers! I grew up in a town with a semi-derelict pier. It has since been demolished. Thanks for this reminder of just how wonderful piers can be!

thank god for that one vote.

I hope you had a party for that vote. Wonderful looking pier. You make it look like it stretches to eternity.

@Michael Rawluk: Thanks Michael! - Its difficult for me to imagine the beach without the Pier - i'm so glad it didn't get demolished!

wonderful colors and contrast! this is beautiful!

@Rachel: Thanks Rachel - I'm so pleased you liked it!

Ian, this one´s so stunning! Magnificent color and a stunning atmosphere!

@Stan Fleming from Maine: Thanks Stan!

I love sunsets and this is an amazing one, beautifully captured, the colours and the silhouette of the pier are georgous!

The pier looks great - I like the round curves of the structures. Beautiful shot.

Very beautiful shot! I love the pier structure silhouette against the colorful sky. I almost posted a somewhat similar shot last night, different pier of course. But yours is a remarkable shot. Well done.

I must post again, now reading the photo caption. Incredible story. How could they consider destroying such history that adds to the beautiful of the landscape, and certainly photos like yours.
It proves every vote counts. I am pleased it still stands.

What a gorgeous sunset it is!
The arch over the bridge is so unique.

Perfect timing, Ian. A brilliant sunset complemented by a stunning silhoutte of the pier. This one should grace the photo art galleries!

impressive shot!!! the mood and settings are all there!!!

@Eleftheria, 9 years old,: Thanks Eletheria! - I liked your welding shot from a few days ago!

I like this one a lot. the colour, the shape of the clouds, the contrast, they are all amazing. Well done!